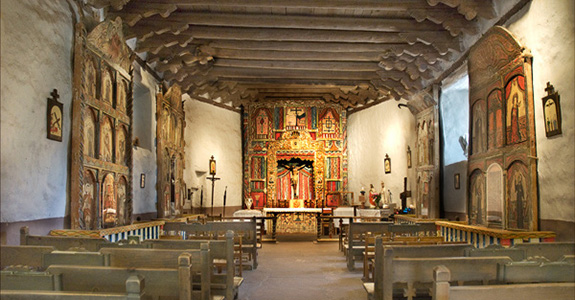 El Santuario De Chimayo church is legendary, as it is claimed to be built on land with dirt that contains healing powers. The story has it that a man found a cross in his field and brought it to the town’s church, where he naturally thought it should go. However, the next day, the cross had mysteriously returned to his field. He brought it to the church again, only to find it back on his land once more. After 3 times, the people took it as a sign that the church had to be built on that spot where the farmer has found the cross believing that the earth in that particular spot had the power to heal.  The faithful rubbed the dirt on the parts of their body that needed healing and along with prayer, the blind could see again, the crippled could walk, and so forth. Shari the kids and I walked through the church which is quite beautiful, trying to be as respectful as possible searching for the pit with the dirt.  I was expecting a big display for something so miraculous, but we entered into a tiny room with a little round  cut out in the floor that was about  18" wide with some children's sand toys in it.  Well the kids got very busy digging away and putting dirt all over themselves.  One had a stomach ache so he lifted his shirt and rubbed it all over himself, one's arm hurt, another had a headache.  Shari and I tried to keep it all on the down low as some women came in and gave us a look of scorn. They must have thought our kids were using the holy dirt as a sandbox.   We were really trying to be as respectful as possible but you could not help but laugh at this scene-5 kids rubbing holy dirt on themselves.  Although I am a skeptic, I do believe in a higher power, so I figured it couldn't hurt and rubbed some on myself for good measure too.  Shari did the same and then we exited through a room filled with crutches, walkers, wheelchairs all left behind by those that were healed.  Driving along the road, I thought about the story of the church and couldn't help thinking that maybe someone planted that cross there those 3 times so that the church could have a new piece of land and spun the story of the powers in the dirt to go along with it. I'll guess no one will ever know but it really makes no difference because faith is a very powerful thing and as long as the believers believe that's all that really matters.  New Mexico is after all the land of enchantment and the home of the Harmonic Convergence.