Yellowstone National Park is America’s first national park, founded in 1872. One of the reasons the government decided to preserve this area as public land is because it holds the majority of the world’s geysers including “Old Faithful.” Geysers are created by steam generated by volcanic heat under the surface of the earths crust. The establishment of Yellowstone National Park inspired the creation of many more national parks not only here in the USA but all over the world as a way of preserving the earth's natural wonders for everyone to see and enjoy. Home to grizzly bears, wolves, and herds of bison and elk, the park is the core of one of the last, nearly intact, natural ecosystems in the Earth’s temperate zone. 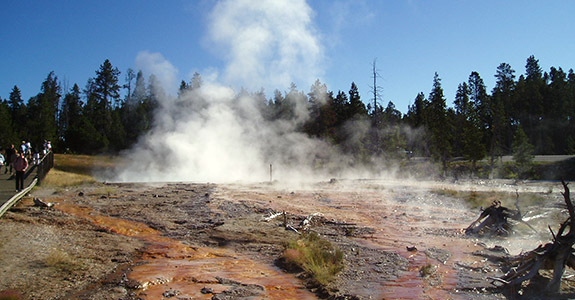 Our adventure in Yellowstone lasted a day and a half as there was so much to see and so much ground to cover.   Since this was a once in a lifetime we wanted to discover it all. The park is divided into two loops the lower and the upper. On our first day we drove the lower loop and the first thing we discovered were the "paint pots"-colorful pools of hot burning acid that are a result of volcanic activity taking place right below and that bubble up through cracks in the earths surface. It's super important to stay on the wooden plank path because any contact with the hot acid can burn you very badly and we made sure all the kids understood that. The colors ranged from bright blue green to rust depending on the chemicals bubbling up. Some of them smelled like strong sulphur and others were just boiling with steam coming off the top. We happened upon a ranger who explained to the kids what volcanic activity is and what was creating the paint pots and the colors. They had lots of questions and it was great watching them draw on stuff they had learned in school putting those concepts together in their brain by seeing those concepts existing in nature in the park. 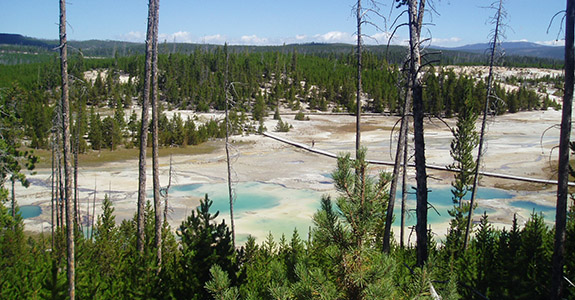 Driving along we headed to our next stop, Old Faithful! This geyser shoots like clockwork, so find out the schedule and then grab your seat on the viewing platform. We waited and waited in eager anticipation not knowing what to expect. Finally we saw a little bubbling but not much. Everyone was so disappointed. "Seriously, this is it?" everyone grumbled. And then all of a sudden,,,whoooosh, this huge stream of water blew up out of the hole as if a fire hydrant had sheared off, shooting water way way up into the air. It lasted a few minutes and then died down. It was definitely a thrill and added another notch in our belt-been there and done that...check!.

Afterwards we spent a little time at the ranger station where they were giving kids a lesson about the local wildlife before we headed further along the loop to our cabin in the middle of the park.  Next we headed to one of the most picturesque spots in the whole park, Artist's points.  There is a gorgeous waterfall that many an artist has come to paint and the photo we took there  is one of my all time favorites from any road trip. 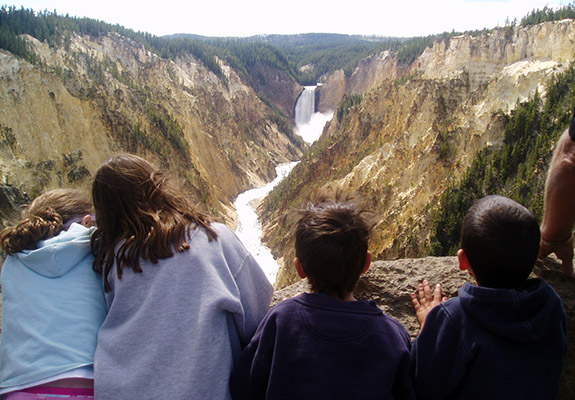 Our cabin was pretty spartan and I am not sure how all seven of us managed to sleep together in one room with two beds and a rollaway but we did it. We were all a little excited and scared to be in the woods knowing there were all kinds of critters and even bears running around outside but it was a fun experience nonetheless. A word to the wise...Be forewarned—reservations must be made months in advance as lodging inside Yellowstone fill up super quickly. Shari and I were a little bleary eyed the following day but we packed up, herded the kids, hopped in the van and kept going. . tackling the upper loop before making our way out of the park

As we were driving around the upper loop tthe kids kept their eyes peeled for bears and any other wildlife. We didn't see much, but all of a sudden we got stuck in a terrific traffic jam. Slowly we started to move and all of a sudden we realized we were driving through a huge herd of buffalo. We stopped for a few moments to admire them and snap a ton of pictures. There were big daddy's prancing around and the moms with their little calves that were just too adorable.  It was truly heartwarming to see these beautiful animals in their natural habitat roaming freely. The kids and I talked about zoos and how those animals lives are different. We were also cautious not to make any wild movements as buffalo can charge. We admired them from afar and then drove slowly out of the park. It was a terrific experience none of us will ever forget. If you ever get the chance to get to Yellowstone take it-it's a DO NOT MISS! 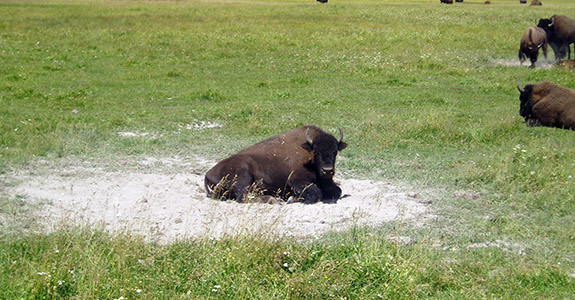