Main Menu
You are here: Home / Go / Brown Vs. Board of Education National Historic Site (Topeka)

Brown Vs. Board of Education National Historic Site (Topeka) 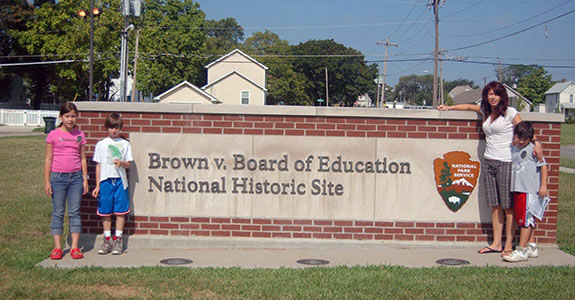 Visiting the Brown Vs. Board of Education National Historic Site was by far one of the most incredible and moving experiences we have had on ANY of our trips. This is the only national park named for a court case—the landmark case that ended legal segregation in public schools. Monroe Elementary School in Topeka, Kansas, is not the only site where the story of Brown v. Board of Education can be told.  There were many segregated schools throughout the country, and countless parents who disliked the segregated system and wanted something better for their children. 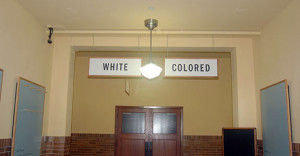 Coming from a state like California, which had never really experienced segregation,  we really did not know what to expect and honestly were pretty naive.  Walking into the original school building which is now a sort of museum and interpretive center, we were immediately greeted by signs that said "white" and "colored".  There were different water fountains and different bathrooms.  My kids were shocked and it made me feel sad because in as much as segregation was supposed to be separate but equal, the separate felt less than, dirty, and unworthy, and I am sure that is exactly how the African American students felt who had to endure such conditions. 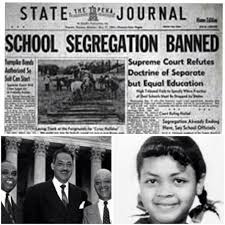 We watched some short but very moving films and participated in some truly thought provoking interactive exhibits  that let us imagine what it might feel like to be separate and therefore discriminated against.   We role played and talked about our feelings-what would it feel like to not be welcome somewhere because of the color of your skin. I was really moved by how my kids articulated their sensitivity empathizing with what those students had to endure and exploring their own feelings.   We learned that this historic court case was actually a grouping of several similar cases that were all brought together and joined as one to be knows as Brown Vs. Board of Education.  All in all it was a tremendous learning opportunity.

Education is such an important tool and visiting this site taught me and my children about empathy- appreciating what life is like in someone else's shoes. Mark Twain once remarked that "Travel is fatal to prejudice, bigotry, and narrow mindedness" and after our visit here,  I could not agree more.  Upon leaving I remarked to the park ranger, how sad it was that  this site was in Topeka and not Washington DC where more folks would have a chance to experience it. This school house and the well designed exhibits are  something every American needs to see.  When we face our history, we face ourselves and it is our obligation to teach future generations the lessons 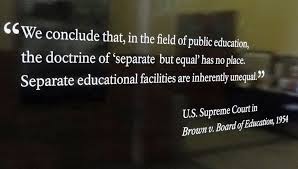 of our past.  As a parent, I believe with all my heart that exposing my children to the world around them and making sure they are sensitive to the plight of others is one of the most important tasks a parent must do. I cannot think of a better place to do that than here,  in the broad shadow of little Miss Brown at Monroe Elementary School. A beyond DO NOT MISS!!