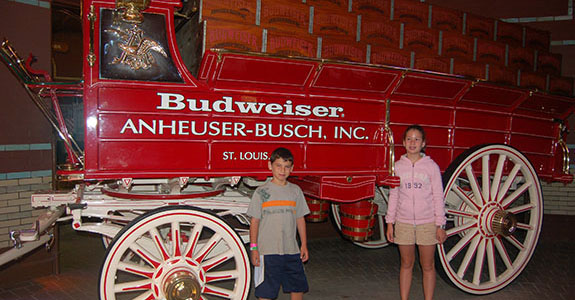 I can hear the commercial playing in my head ... Budweiser Beer, St. Louis, Missouri ... well guess what, St. Louis really IS the home of the Budweiser beer factory and not only can you take a tour of the factory, but you can even see those famous Clydesdales in person!  This factory tour played right into our theme of The Immigrant Expreience, after all Budweiser Beer was started by a German immigrant named Adolphus Busch who settled in St. Louis and started out  in the brewery supply house business in 1867. He later married Lilly  Anheuser whose dad had a small brewery and together they partnered to create the Anheuser-Busch company we know today .  After a tour of the stables, we headed over to the brewery.  As we approached, the kids and I kept smelling a very pleasant  smell sort of like baking bread but not quite. It's actually the smell of the barley, malt and hops fermenting. First we stopped at the beechwood aging cellars which is where the fermentation process starts and the beechwood also add carbonation.  The tour continued to another room that held larger vats where the final fermenting process takes place.  We then hopped on the little shuttle bus and made our way to the bottling plant.  Inside on some viewing platforms we were able to see tons of bottles heading in all sorts of directions,  twisting and turning on conveyors being filled and capped and packed for shipping.  It was all pretty impressive and I felt we were witnessing American ingenuity at it's finest.   What was most remarkable to me is that Budweiser Beer is is a great example of the immigrant story, where someone brought recipes, traditions, and know how from a foreign land and made them uniquely American.-That story repeated over and over again is the secret sauce that makes America uniquely wonderful.

After our tour, all the adults could not wait to get to the tasting room (mind you this was at 9am in the morning).  The kids and I wandered over too.  I'll be honest, it's hard not to keep smelling that delicious smell wafting up your nostrils and not want to take a taste.  The kids took a seat while I grabbed a small cup and got each of them a bag of pretzels.  They were dying for a taste, and you know me, I am all about letting them try stuff.  So very carefully when no one was looking I let each of them take a small taste out of my cup.  Each one thought it was totally gross, sticking their tongues out and making a face (I am sure that will change once they get to college).  Beer is not my thing, but there sure are a lot of folks who really like it so here's to you Adolphus Busch bringing your German traditions with you for creating the All American beer right here in St. Louis. 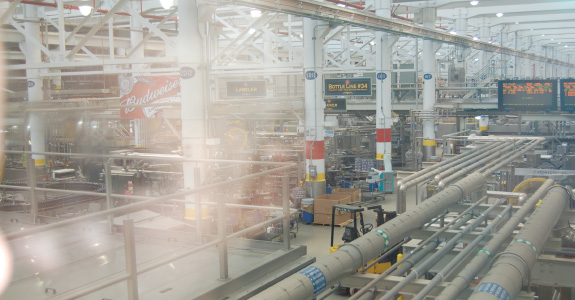