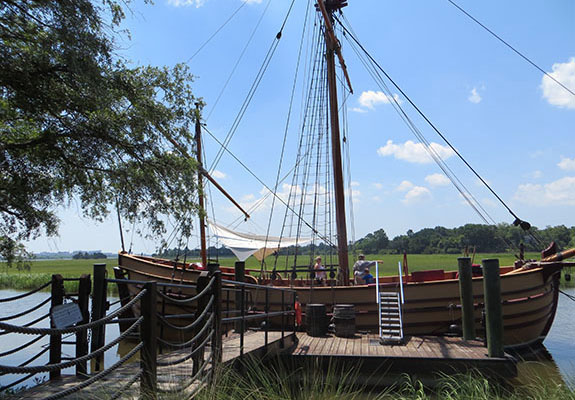 Charles Towne Landing is a 663-acre park located on the site where English settlers first landed in 1670, thereby establishing the birthplace of the Carolina colony and the plantation system that eventually spread throughout the American South.

Checking in at the visitors center were found out there were two parts to this visit.  The first part entailed a walk/hike around the settlement and the second part included a self guided tour through the exhibit space.  On the day we visited it was a sweltering 95 degrees and very very humid.  We walked around the settlement and imagined ourselves as colonists coming to this new land not knowing what we'd find or what to expect.  As the kids complained about the heat, I asked them to imagine themselves in layers of clothing like the colonists would have worn, without the benefit of air conditioning or other places to cool off.  We take so many modern conveniences for granted and so often times it's places like these that help us gain perspective and appreciate the suffering and enduring spirit of those brave folks who came before us and settled here.

First we explored the Adventure which is a replica ship much like one that might have been used to bring the 148 colonists who landed here at Albermarle Point.  Exploring on board with a costumed guide, the kids and I were initially shocked at how small it was to carry 148 men women and children along with supplies to last an ocean voyage across the Atlantic. There was very little area for shelter, no privacy and of course no bathrooms or running water.  None of us could imagine riding on that tiny boat across the ocean for 3 months. 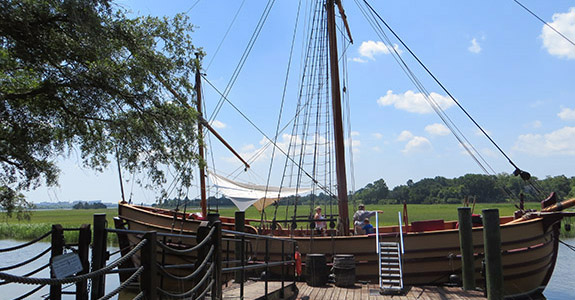 From the boat, we then headed to the Fortified area where we learned about the importance of a palisade wall.  The kids and I learned that a palisade wall is constructed of sharpened wooden logs with a ditch in front to prevent access by hostile native American tribes who were allied with the Spanish.  We all tried to imagine ourselves inside the walls of this colony wondering if we'd feel safe.

Lastly on our outdoor tour we visited the crop garden which tries to closely follow the Lord's Propietor Plantation originally planted here to start the highly profitable plantation system that came to dominate the south.  I can't even begin to tell you how informative this living history museum is.  Putting all of us in the scene and mindset of the colonists by recreating what happened on this very spot was amazingly powerful and truly unforgettable.

Afterward, dripping with sweat and exhausted from the heat and humidity, we arrived at  the wonderful air conditioned museum on the grounds that details the age of discovery and the new world during the colonial times. Here we coupled what we observed outside with what was happening in the entire region.  Through artful and informative displays we learned about the history of the colonies and their establishment, as well as the plantation system and the introduction of slavery. 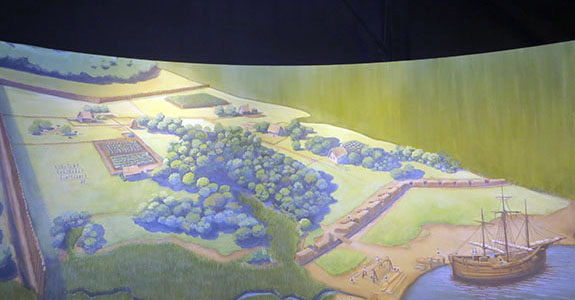 This place is simply an amazing experience, however, to make the most of it, make sure that you compare and contrast what you are seeing to your perceptions of history and your way of life today.  Ask each other thought provoking questions and talk about what you are seeing.  Could you be a colonist? Would you feel safe, would you survive? This is the kind of education you can not get in any book and it's unbelievably powerful.  Experiential learning by engaging the senses left us with an appreciation for those brave colonists that we will not soon forget, because those memories and experiences have become part of who we are.

Charles Towne Landing is a Do Not Miss and one of our favorite living history museums of all time.