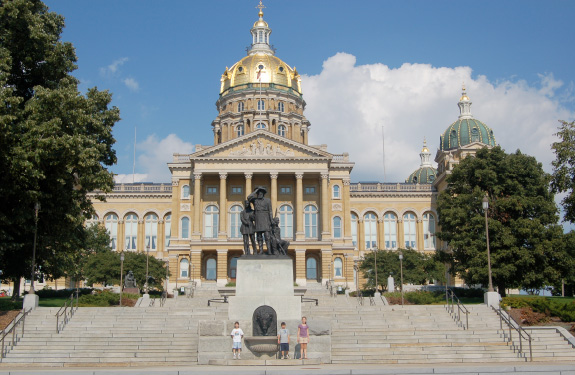 Arriving in Des Moines after driving through miles and miles of corn, we made our way to the Iowa State Capitol Building which stands out in the city like a gleaming gold domed beacon.  We were greeted by the beautiful bronze sculpture of two frontiersmen and a Native American tribesman.  I imagined them looking out onto the rolling plains wondering if they had any clue that these parts would later become one of America's greatest food sources.  We ran inside, kids excitedly rushing to the rotunda to see their favorite part...the dome.

As our eyes traced upward, our jaws dropped as it was easily one of the most beautiful domes we'd ever seen.  Lined in 23-karat, the inside of the dome I couldn't help but think that design resembled gleaming corn kernels.I am not sure what the original architects had in mind, but I felt like I was standing inside a golden corn cob looking up at the sky.  Painted in the center is an eagle holding a American flag with the state seal attached.

We walked around and read some of the numerous and beautifully painted quotes that have to do with governance and law, and admired the numerous murals throughout depicting events in Iowa history.  There was also a sweet little display of all the Iowa first ladies as dolls.  The Iowa statehouse was truly a surprise as we would have never guessed we'd have found such an ornate jewel box in a farm state that typically celebrates simple pleasures.  Don't miss this truly spectacular state capitol if you find yourself in Des Moines. 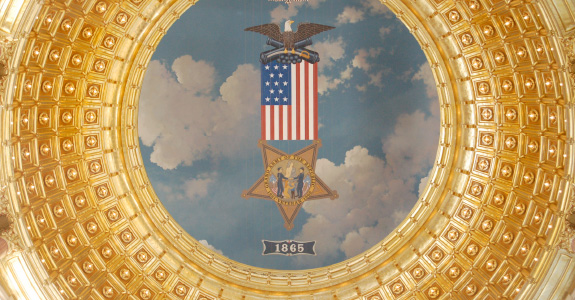