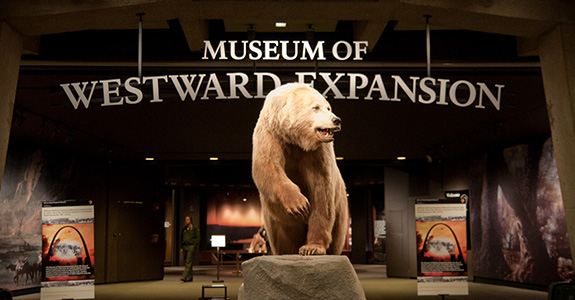 Located under the Gateway Arch is the Museum of Westward Expansion which houses some of the rarest artifacts from the days of Louis and Clark.  This is a fitting place for this museum as the arch is on the banks of the Mississippi River, the gateway to the west over which many explorers and pioneers headed out to settle the Louisiana Purchase and seek their fortune. In all honesty, the kids started to moan when I mentioned another museum, but somehow I bribed them to indulge me and venture inside.  Truth be told we'd seen and learned a lot about pioneers and Louis and Clark during our visits to Montana and North and South Dakota so it did feel a little repetitive to us, but I felt it was really important to understand it all from the St. Louis perspective.  This is the place from which folks were setting out, the last bit of real civilization and urban sprawl that they'd see before heading out to parts unknown.  We saw the types of supplies they took, everyday items like washboards, cooking utensils and tools.  We saw covered wagons and how the settlers made camp.  There were tons of black and white photos of real people who made that incredible journey.  There were also beautiful exhibits about the Native American's who the settlers encountered as they headed west.  Some were friendly, some not so friendly.

As we wandered around and looked at the exhibits, I asked my kids what they thought it would be like to be a pioneer, heading west in a covered wagon.  It certainly didn't look very secure or safe either as a shelter for weather or if you encountered some unfriendly faces and needed to take cover.  What if your wheel broke or your horse took off or got injured?  We all tried to imagine ourselves in that situation together as a family.  I am not sure if we'd have the same bickering we do today, like arguing over who sits in the middle-can you imagine in a covered wagon?-you'd probably be lucky just to get a seat.  For some reason in our house my kids like to hoard their own snacks labeling them so none of the other kids will touch them.  I don't think that would go over too well for a pioneer family-"no you can't eat that, that's MY beef jerky.". Survival, danger, uncertainty puts everything in perspective and looking at the pictures of those brave folks in the museum, my kids felt a little sheepish thinking about the trivial nonsense they argue about.  Ahhh, I just love those teachable moments....I can only hope they have an impact...All I can tell you is that my kids still hoard snacks and argue about sitting in middle even though they know it's dumb.  When I bring up the museum and the pioneers, the best I get is "but Mom, seriously, we're not in a covered wagon, we don't have to worry about that stuff".  At least they are aware, and hopefully when they mature a little more, that memory will come back to them, and everything will fall into perspective.  This Mom can only hope.

Filed Under: Go Tagged With: Missouri