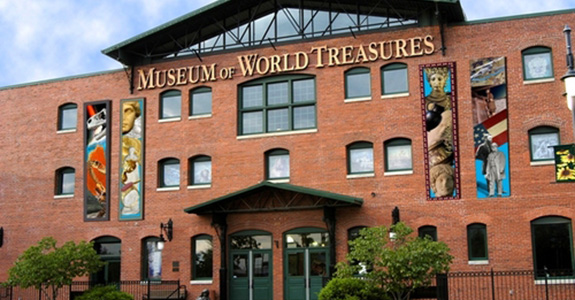 Imagine if Indiana Jones came home and brought back a ton of souvenirs—that’s what the Museum of World Treasures feels like. My kids and I walked in not knowing what to expect and were blown away by this extensive, fascinating and eerily creepy collection of unusual artifacts.  We saw all kinds weirdly mesmerizing items from ancient Egypt, Ancient Rome, South America, prehistoric times, you name it.  None of these things looked museum quality but they were definitely old and probably the real deal.  How they were collected is anybody's guess.  There was just so much, everywhere you looked, on shelves, in cases, everything from Titanic memorabilia to World War I artifacts to pre-Columbian fertility gods to dinosaur bones.   The freakiest thing we saw was a real shrunken head, and worse—written in detail was the procedure used to create one from a real HUMAN HEAD It basically involved removing the insides and the bones, stuffing it with rock to keep it's shape and boiling it and then letting it shrink…Ewwwww! Even today, just thinking about it gives me chills. Reading the placard we learned one ancient warrior king traded his most decorated warriors (they were beautifully tattooed for their brave feats) for gold and jewels to traders who would then cut off their heads and shrink them to be brought as souvenirs back to Europe for collectors.  Eventually the king as a result of his greed had no warriors left to protect him and they took his head as well.   Every now and then Joel and I think back on that experience and wince in a collective gross out moment, but even though it's gross, in my heart I know its a special connection he and I share. The displays just go on and on and it often seems jumbled and all over the place, but you won’t be able to look away. Even more incredible, upon leaving we found out it was all it  just one person’s private collection of stuff!