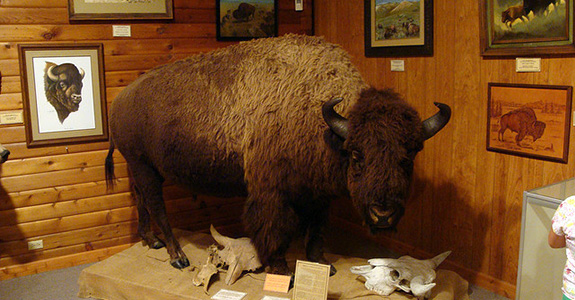 Visiting The National Buffalo Museum and Frontier Village was a memorable and moving experience. Before entering the museum there is a small frontier village with a few shops that sell arts and crafts made by the local tribes of the Sioux and the Lakota. I got a really great pair of handmade buckskin moccasins that I love so much I am afraid to wear them for fear of ruining them.  Isaac got a little drum that reminded us of our trip to the Taos Drum Factory on our last trip-all the items were handmade by the local tribes people, no made in China nonsense here..   After the village we headed toward  the museum, and we were eager to get inside as there was a huge storm brewing which later turned into a tornado after we left.  You can read about that adventure by clicking here.  The National Buffalo Museum covers the history and role of the buffalo in the region and their importance to the survival of the Native American people. You will learn how the buffalo population was decimated by greedy hunters who shot them for no reason at all, just the thrill of the hunt.  Sadly, buffalo roam in very few places in this country anymore.  They are now being farmed and you can find their meat at some fancy supermarkets like Whole Foods because it is healthier for you than beef.  The museum also touches on the Wounded Knee massacre of the Lakota by the hands of American soldiers. On exhibit in a glass case there was a rifle that was used in the massacre. When I walked by it I was just overtaken by feelings of deep sadness and trauma that reached down to my soul as if the energy of that rifle and the events that took place were coming through to me in a way I could not explain.  I was definitely channeling something truly disturbing and  I couldn’t help but shutter as I walked away because it was almost too much to bear. It was almost as if I could hear the cries of the people—a moment and feeling I will never forget.  The museum is also home to a herd of buffalo, including one special albino buffalo named White Cloud. Unfortunately, we did not get to see him as there was a huge storm and tornado watch, which meant the herd was hiding. But if you go, be on the lookout!  Don't forget to check out the gift shop.  I just had to bring home the most adorable stuffed buffalo that now sits my family room sofa.