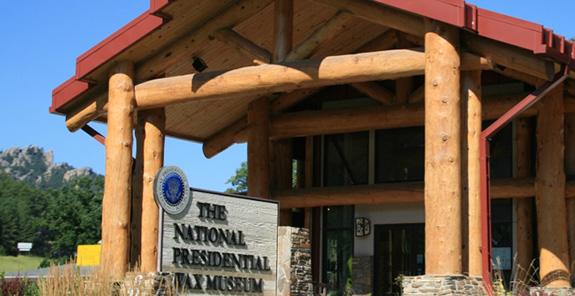 Just at the gateway to Mount Rushmore is the town of Keystone, a true frontier town with lots to see and do. It’s a great place to have lunch, explore some interesting shops and trading posts and engage in some fun activities at some quirky little tourist traps like the National Presidential Wax Museum.  While we were having lunch at the local pizza parlor we were startled by some shouting coming from the street.  We peered out the window to see two western frontiersmen engaged in a mock gunfight right in the middle of the street.  Before I even had time to process that this was fake, one of them fired his gun (with blanks of course) and the other dropped "dead". It completely scared the hell out of me and my kids until we realized it was fake as they got up shook hands and took a bow to rousing applause.  The certainly make you feel you are out on the frontier in Keystone.

After lunch we headed across the street to the museum.  I thought this would be really cheesy, and in a way it was, but we really enjoyed it.  We turned it into a quiz and the kids had to guess which presidents they were looking at. It was really great to see how much they'd learned in school, each trying to outdo the other with their "encyclopedic" knowledge as kids usually do-funny and a little annoying all at the same time.  The ones they didn't know, we learned some new and interesting facts about.  It was a quick stop, fun and educational. Oh and by the way, the wax sculptures were really well done, and I am a tough cookie to impress!