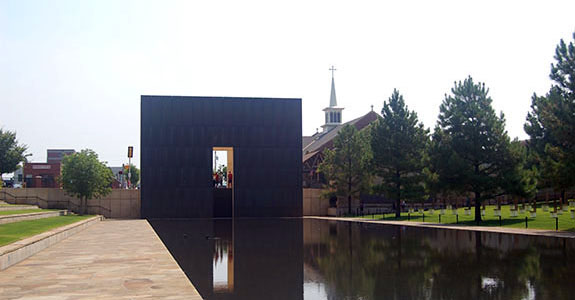 The Oklahoma City National Memorial was a particularly difficult stop.  Not only was it heartbreaking and sad to imagine how many innocent people lost their lives, it was even more difficult to explain to the kids how someone expressed his political views by killing innocent men, women, and children. On the morning of April 19, 1995, Timothy McVeigh parked a rental truck loaded with explosives in front of the Alfred P. Murrah Federal Building.   At precisely 9:02am, a massive explosion occurred shearing the entire north side of the building, killing 168 people.

Today, a memorial stands at the site as a remembrance for what happened that day and to honor those who perished—many of whom were children. On the site there are two large black walls with what looks like a door way.  One is labeled 9:02 and the other is labeled 9:03 and in between them there is a long shallow pool of water-a metaphor for the moment that life was forever changed from one minute to the next. 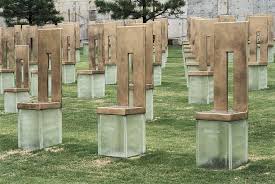 We stood there for a few moments taking it all in, in silence contemplating how in one minute's time so many lives were tragically changed forever.  As we walked along the shallow pool we saw a display of chairs, each of which had a name.  There were larger chairs for the adults  and small chairs for the children each serving as a memorial for those who died that day.  It was heartbreaking to look at, knowing their lives were cut way too short, and trying to comprehend  the grief their families suffered losing a loved one especially a child. Though we can never know their pain, I felt that by standing there we stood as caring fellow Americans silently offering our condolences. 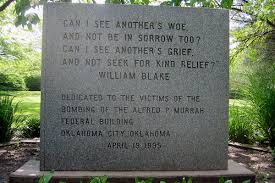 There is also a museum on site which chronicles the events that happened on that fateful day and the ensuing investigation that finally led to the capture of those responsible.. We did not go inside, as I also thought the images might be too disturbing for the younger kids. Visiting the memorial is a solemn experience and another great teachable moment-about showing respect and sympathy for our fellow Americans, about proper ways to express  political views and about heroism in the face of tragedy.