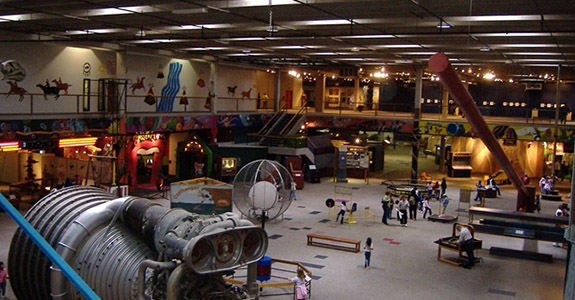 The Omniplex Science Museum of Oklahoma is another terrific science museum. The truth is, I probably would not have stopped here since we’d already seen a bunch of these on other trips, but it was AIR CONDITIONED and we needed a break from the blazing hot Oklahoma heat. There are lots of activities and constantly changing exhibits and a really cool Imax theater, so if you aren’t too jaded already, you should check it out.  It's really funny how some kids just mindlessly press the buttons without taking the time to figure out what's happening while others are engaged.  I will say that sometimes an exhibit is poorly illustrated or confusing and I can see why kids wouldn't get it, but sometimes all it takes is a little curiosity and something truly interesting can be learned. One really great exhibit focused on tornados.   Much of Oklahoma, Kansas and Nebraska is called "Tornado Alley" because the environmental conditions are such that tornados appear here frequently under certain weather conditions.  This museum had a super interesting exhibit about how and why tornados are formed by mixing warm and cold water vapor.  The kids were able to watch inside a large plastic case with air coming down and up to create a mini tornado funnel.  After reading about  the exhibit together, we talked about what we saw taking place.   My kids were pretty engaged but sadly the other kids we were traveling with just had blank expressions, didn't ask any questions and just ran off to find the next set of buttons to push. I don't know if it's ADD or just an inability to focus but I see this a lot. As children and now teens, I know my kids are sometimes tuned out and as a parent I worry that they may be affected in some way, but it's times like these that I realize that their brains are engaged, they are curious, and they are absorbing what they are learning.   As a mom I am very proud of them, but at the same time, sometimes these outings help me gauge their abilities, and  I breathe a sigh of relief their minds function the way they are supposed to.