Passing over the bridge to Roanoke Island we found ourselves entering a quaint area with a legendary history. Roanoke Island has been known in American history for its significance as the site of Sir Walter Raleigh’s planting of an English settlement with his Roanoke Colony in 1585 and 1587.  The Anglo-Spanish war delayed the delivery of much needed supplies and when a ship was finally able to make it back to the settlement 3 years later, it was found to be deserted.  As the fate of the final group of colonists has never been determined, myths have developed. Stories about the "Lost Colony" as it has come to be known, have circulated for more than 400 years. The best place to learn all about the lost colony of Roanoke and life as a colonist on the island is at the Roanoke Island Festival Park.

Following a gravel path we learned about the native peoples who lived here and the English settlers who arrived and formed the Roanoke colony. Costumed guides explained what life was like on board the sailing vessel that brought 150 settlers and crew over from England. We were quite  surprised at the size of the boat (it is a life-sized replica) as we tried to  imagine our family spending months at sea to get to a strange new land that we might hope to call home.  I am not sure the four of us would have been brave enough to make the journey. 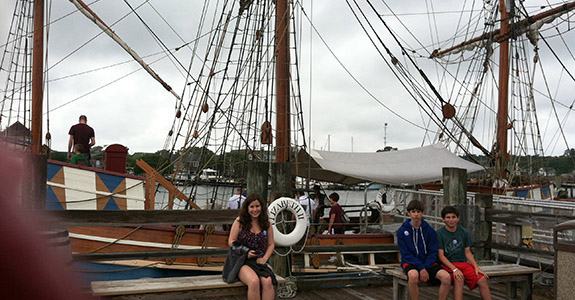 Moving along the path we entered the settlement area and learned about the first group of craftsmen who came to set up the colony prior to its future inhabitants. 107 men initially landed here and set to work building a settlement fort. Our guides likened them to to a group of contractors who came out to set up the settlement so that the colonists could then "move in".  We met the blacksmith and watched how he fashioned nails and other necessities that the craftsmen and colonists might need to build structures, furniture and other necessities.    I still have the nail he made for us and it's one of my prized souvenirs.   The boys learned how to plane wood and how to sharpen it to make stakes. The boys also got a kick out of trying on protective armor and posing with the swords and shields.  It was very heavy but trying it on, gave them a sense of what life was like for the first creators of the colony.  When you think about all the unknowns, the dangers of life in the new world, you realize it was a pretty tough gig. These original craftsmen returned to England with Sir Francis Drake introducing tobacco, corn and potatoes. 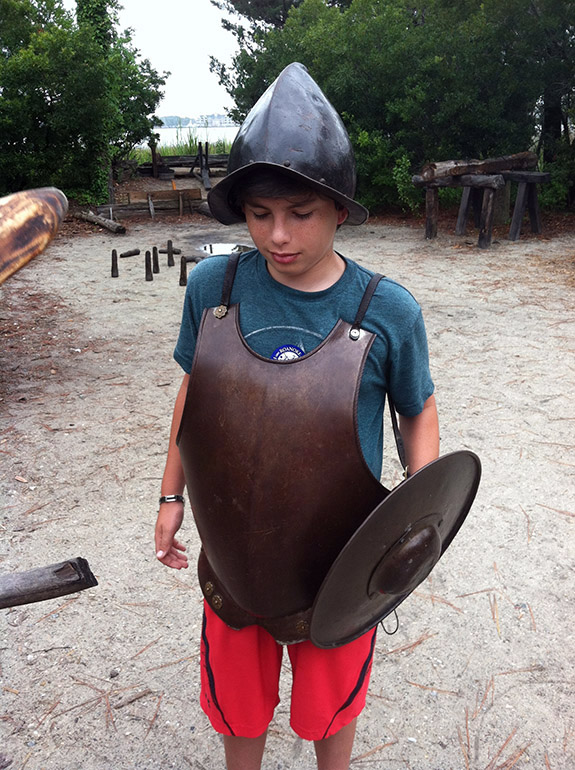 In 1587 115 colonists-men, women and children were brought to establish the colony by John White, a friend of Sir Walter Raleigh but were dismayed upon their arrival to find the original craftsmen gone.  The colonists including the first baby born in the colonies John White's granddaughter Virginia Dare, were left while John White sailed back to England to bring help and more supplies.When they were finally able to return 3 years later, the colony was deserted.  The 90 men, 17 women and 11 children vanished.  To this day, no one knows what happened to those initial colonists, only that they disappeared and were never heard from again. The only clue the colonists left behind was the word Croatoan carved into a tree.  A common belief is that they were absorbed by the Croatan Indian tribe.

After the living history tour, we headed into the exhibit space to learn more about Sir Walter Raleigh, John White, and the other personalities connected with the settlement.  We learned about exploration of the coast and privateering and the men who sailed looking for fortune and fame.  After the exhibit the kids wandered out to an area near the ticket booth where they were able to scour for shark teeth amidst tons of broken shells.  My boys love treasure hunting and this kept them busy while Lilia and I perused the gift shop.

Overall, the Roanoke Festival Park is a DO NOT MISS.  What a great way to experience and learn about the very first settlers who made this area their home and the mystery as to what happened to them.  Make sure you take some time to visit the adorable town of Manteo as well. It's beyond charming and really plays up the colonist connection.