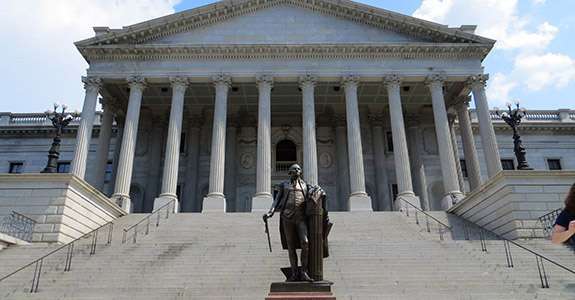 The South Carolina State Capitol Building is pretty in terms of architecture, but it doesn't stand out as memorable. in terms of aesthetics.  Inside we found some pretty stained glass pieces, a pretty dome and some bronze commemorative plaques but not much else inside.

Outside, on the surface nothing seemed particularly notable until we started to notice a few things that clued us into the history and spirit of South Carolina.  During the Civil War, Columbia was in General Sherman's path and he set to shelling several public buildings including the capitol building that stands today.  On the outside of the building you will find 6 bronze stars which mark the spot where Union army shells hit the building.  If you have the time, see how many you can find.

What the kids and I found most shocking though was the flying of the Confederate flag on the grounds at the very front of the state capitol building.  Many consider that flag an offensive symbol particularly African Americans because it is the flag of those who sought to preserve slavery.  According to a plaque on site, the flag is flown proudly here to  honor the Confederate dead. After visiting numerous museums and learning so much, we came to realize that South Carolina was the state most committed to the secession of the South. South Carolina rejected all offers of a peaceful settlement and were definitely the rebel rousers who were committed to preserving their economy and way of life based on the plantation system and slavery (which for wealthy landowners was unbelievably profitable).

After our visit here, it was readily apparent, that South Carolina had been the driving force, steadfast and stubborn willing to split our country in two.  It's clearly a heritage they are still proud of, but somehow that left the kids and I with a chill.  Not all history is pleasant, and not all people share the same point of view, and I saw it as another teachable moment to explain that to my children right there in front of the State Capitol Building staring at the Confederate flag flapping in the wind.