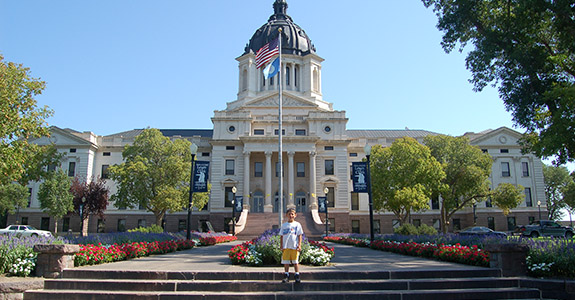 You can't drive through South Dakota without going to the South Dakota State Capitol Building in Pierre.  For some reason that state capitol always stuck out in my mind when I was memorizing the 50 state capitols in grade school. I always thought the way to pronounce it was like the French name Pierre (Pee-air), but it’s not. If you want to sound like a local and pronounce it correctly, it’ pronounced PEER.

State Capitols usually opens pretty early, so it’s nice to get them out of the way first and move on to your next stop.  Most are very pretty inside and South Dakota's was no exception.  Inside we found a beautiful gold domed rotunda.  Folks thought I was a little nuts when I laid down on the floor smack dab in the center and took the second shot that you see here.  We love the domes and they kind of remind me of what I saw when I looked through the kaleidoscope toy I had as a kid sparkly and jewel like.  There is a sweet little exhibit of dolls wearing replicas of the gowns of the first ladies of the state.  After checking that out we popped in to see the house and senate chambers and walked by the governors office before taking off the the Badlands. 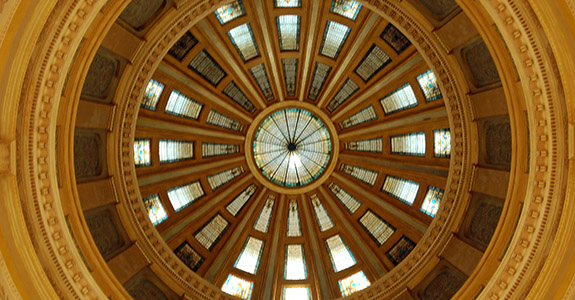