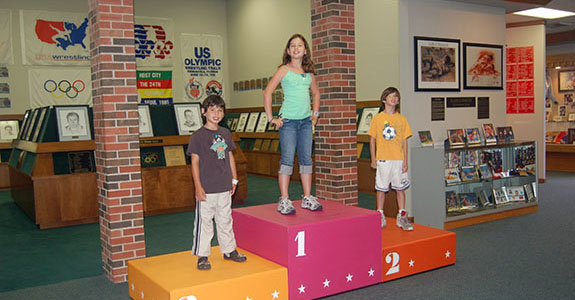 The National Wrestling Hall of Fame is where you can find everything you always wanted to know about wrestling, all in one location. Since we were passing through and needed a pit stop to stretch our legs I thought this would be something interesting and educational even if it was just a quick visit. This stop was ok, low key and definitely not on the high tech or glamorous side.  We walked around looking at the displays learning about wrestling in ancient Greece up until today. The kids stood on the blocks waiting to be presented their imaginary medals while I hummed the Star Spangled Banner. We saw how the uniforms had evolved and even some of the trophies.

On one wall, the history of wrestling in the Olympics was chronicled with a board dedicated to each of the games.  I was super curious to see if there would be any mention of the kidnapping and murder of the Israeli wrestling team at the Munich Olympics by terrorists.  Now granted this is the NATIONAL wrestling hall of fame, not international but I felt that since they did have an area dedicated to the Munich Olympics then they should have  at least mentioned it....somewhere. I saw the board for the Munich games...and nothing, as if it never happened.

Surely the American team must have been affected emotionally, surely some events must have been cancelled.  There was not a single word written about these tragic events that played out on the world stage.   I must admit that the Jewish part of me felt that this was a slight  because the team was Israeli meaning Jews .  I asked the person in charge why it wasn't mentioned and she had no clue whatsoever.   As we left  during the car ride to the next stop, I spoke to my kids about what had happened during those Munich games and why the Israeli wrestling team was targeted.  It was a lot harder to explain why there was no mention of those tragic events that at the Wrestling Hall of Fame.

Filed Under: Go Tagged With: Hall of Fame, Oklahoma