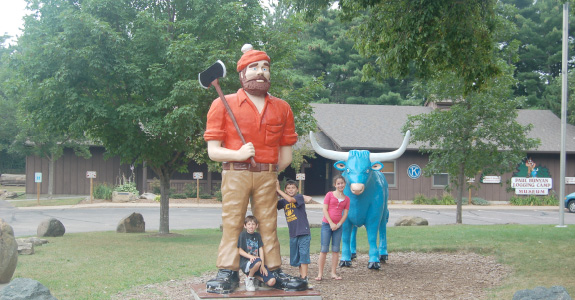 The Paul Bunyan Logging Camp Museum is a wonderful place to learn about an important part of Wisconsin history and an industry that was and continues to be an important part of the American economy- logging and lumber production.  Paul Bunyan was a mythical figure; however, there were plenty of real lumberjacks that inspired his legend. Inside the logging camp, we learned about what life was like for many immigrant young men from Scandinavia and Eastern Europe who came here to work and send money back home to bring their families to America.  As the country was growing and more people were settling out west, the demand for timber grew, and the forests of Wisconsin were a major source of building lumber. Men would live in the camps and work long hours felling trees and turning them into lumber to be used for building homes and other structures

The conditions were rough.  The men slept in uncomfortable bunks that were often infested with body lice.  With little time off, any personal items had to be bought at the company store.  We learned that one of the ways a camp would attract the best and strongest men was by the food they served.  The camps served enormous portions hence the name "lumberjack breakfast"

Logs could be harvested all year long  but surprisingly we learned that winter was an important logging season because then the logs could be transported by horse-driven sleds over the ice instead of through the mud, which was much more difficult. Walking through the camp we also saw the equipment, all types of saws and axes that were used to cut down the trees and load the logs to be transported to the river to float to the sawmill.  The saws were enormous there was no doubt it difficult and dangerous work.

As we wandered around, we all tried to imagine ourselves as strangers in a new land, struggling to survive and earn enough money to bring our families to join us.  We discussed the industries that immigrants find themselves in today when they arrive such as meat packing and sharecropping and even less physically demanding jobs like the high tech industry and nail salon workers just to name a few.  Our country was built on the hard work of immigrants and it continues on, the same story repeating itself, just in different settings. Immigrants are and continue to be an important part of American history.