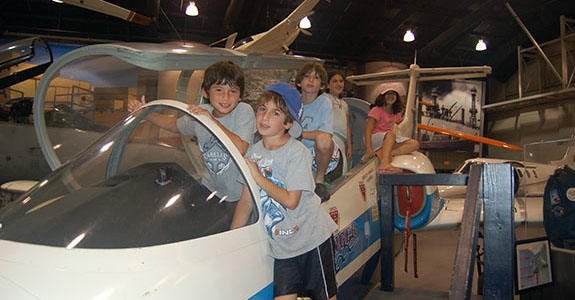 I had no idea Tulsa had such a huge connection to aviation until we visited the Tulsa Air and Space Museum.  Tulsa  is where many pilots trained and many commercial airlines had their facilities located.  The original Tulsa airport's Hangar One hosted airplanes belonging to Charles Lindbergh and Amelia Earhart.  Entering into the museum we were greeted by some veterans and former airmen who now serve as museum docents.  The were full of interesting facts and stories but I think they were a little annoyed with the number of kids in our group and their typical shenanigans.  Fighting over whose turn it was and pushing a million buttons didn't go over too well with these men who take their role pretty seriously.    There were lots of hands on exhibits and it was a little like herding cats to keep the kids from running around and jumping in the cockpits at every turn.  Isaac and I discovered an exhibit where you sat in a little cockpit and used controls to fly a model plan through wind powered by a fan.  Isaac's job was to get the plane to lift off and to keep steady and he did a super job with the help of one of the former airmen.  As we wandered around the exhibits I was saw an Israeli flag hanging above a picture of 50 young men titled the Spartan Boys that caught my eye.  Because my dad lived in Israel from age 15 until he left to come to the US at age 24 and because he'd also been a mechanic in the Israeli Air Force, I was intrigued.  After reading about the display, I learned that these 50 young men came here in 1949 to be trained at the Spartan School of Aeronautics to become mechanics for Israel fledgling air force.  The spent time learning how to work on the planes that the United States gave Israel to defend themselves.  As a Jew, I feel a deep and personal connection to Israel and looking at this display made me proud both as an American knowing that our country supported the Israeli's and as a Jew feeling grateful for America's support and the enduring spirit of those young Israeli's who gave their all to learn something completely new to help their country survive.  Many of the Spartan Boys were survivors of the holocaust.  On display as well, there was an Israeli Air Force leather bomber jackets that was given as a gift as thanks for the outstanding training they had received here.  Seeing that jacket, I wondered who wore it and what heroic acts that person had done.  I noticed it had a paratroopers pin on it.  Israeli paratroopers are the bravest and most admired of all the military in Israel.  Looking at that jacket, I stood awestruck.  Besides some incredible standouts, the Tulsa Air and Space Museum is a terrific place to learn about the important role of aviation in Tulsa and for the whole country.