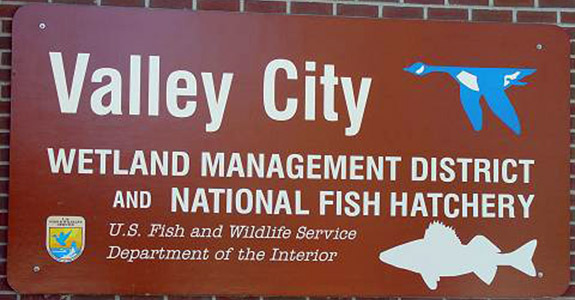 The Valley City Fish Hatchery was one of those places where we needed a stop to break up a long car ride and there wasn't much else to see or do in the area.  We checked it out and were really surprised at how  unexpectedly cool, interesting, and educational it was.  Apparently, fish hatcheries like this one grow baby fish to release into the lakes and rivers in the surrounding areas to help the ecosystem and to given fisherman something to catch. Walking up we saw lots of large tanks holding tons of baby fish at various ages. Northern Pike, Walleye, Tiger Muskies, Yellow Perch, Smallmouth Bass, Largemouth Bass, Bluegill and Pallid Sturgeon are all raised here.   Inside the visitor center you can watch a short film about how they harvest the eggs and sperm of the fish and hatch lots of new fish to repopulate the waters in the area.  If you haven't had that talk with your kids about eggs and sperm and where babies come from this might be a good time to get that all sorted out. My kids already new the basics but they still had lots of questions and I was not shy about answering them.  I remember as a kid, my parents never talked about any of that stuff.  I think they were just super uncomfortable and so everything I learned was from reading books or from my friends.  While my parents were off the hook, I never had the kind of relationship where I felt I could come to them with a problem.  Becoming a parent myself I knew that was not the kind of relationship I wanted with my own kids.  I want my kids to always feel comfortable asking me anything, knowing that I will give them an honest answer, and if I don't know something we will find out together.  Thankfully over time we've built the kind of relationship where we can talk about anything  from A-Z, and sometimes they feel a little too comfortable, but I guess I'd rather have it that way than the other way around.  If you do find yourself in a tough situation trying to find the right words,  the staff are also super knowledgable and handled every question perfectly.  In addition to the fish, there are also neat  exhibits about the local wildlife, and in one activity the kids had a fun time matching tracks to the local animals.  This was a stop that having been there I would highly recommend.