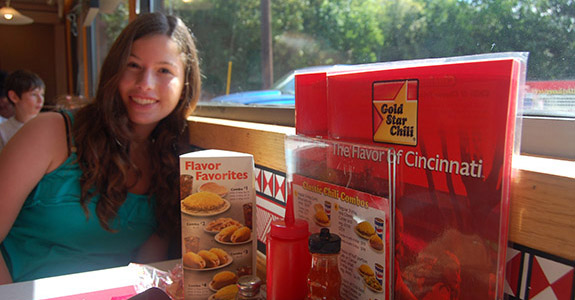 Apparently if you really want to sample the flavor of Cincinnati, you've got to try Gold Star Chili.  I like chili but I am not a huge fan, however,since this IS the flavor of Cincinnati I figured we just had to try it.  We got the 411 on this place because my boyfriend Jordan's college roommate is the son of one of the Daoud brothers, the founders of what has become a Cincinnati institution.  The Daoud family, perfected the chili recipe that is so popular it's enjoyed by residents all over the city after finding a chili recipe left at the original restaurant they purchased.  After tweaking the recipe to their liking, it seems many other folks found it irresistible and the successful Gold Star Chili business was born.

I have to give them major props because at the time we were vegetarian not eating any meat, so they gave us a vegetarian version of their very popular chili.  I must say by unanimous vote, it was It was absolutely delish! They've also got a huge menu of a ton of other stuff too, but you've got to sample the chili if you really want to get the "The flavor of Cincinnati".  Our crew gave it a rousing thumbs up.