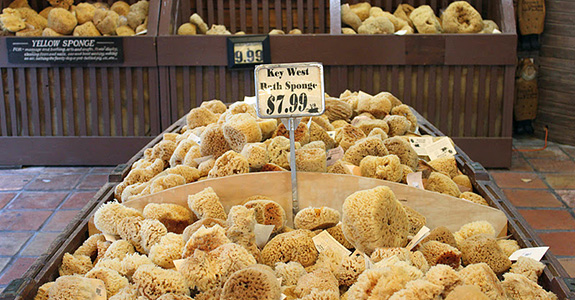 Mallory Square is pretty much the center of where all things are happening in Key West.  It's a terrific place to walk around, check out the fun and unique shops and kiosks and do some awesome souvenir shopping.

You can get the requisite t-shirt or shell art, but why not get something really unique with some Key West history?  A really cool souvenir I bought here was a natural sponge at the Key West Sponge Market. Before cellulose sponges (you know the brightly colored kitchen sponges you buy at the market) were invented, folks used natural sponges— the dried out remains of tiny creatures that live on the bottom of the ocean. In Key West, local divers would harvest the sponges and then they would then be dried and sold. Using natural sponges became very popular and from the late 1800's till just after the turn of the century, Key West was the natural sponge capitol of the country and selling sponges was a huge part of the local economy. by 1905 the sponge population was depleted and the industry moved elsewhere.  As I explained to my kids, the lesson to be learned here is the importance sustainable farming.  Had the sponge divers not harvested all the sponges but left enough sponges so they could reproduce, then the industry would have continued for much longer not only preserving jobs, but protecting the ecosystem of which the sponges are a part.  That is the same lesson we need to apply to fish and many other products that we derive from our oceans.  We need to be responsible harvesters leaving enough to sustain for the future and keep the delicate ecosystems intact.

I love using my natural sponge in the shower, it lathers up great and gives a nice little massage and reminds me of the paradise that is Key West every time I use it. You should try it!