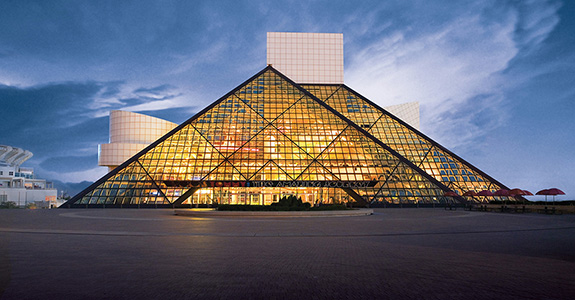 The Rock and Roll Hall of Fame is just the epitome of cool. Walking  in, we were greeted with stage props from U2 and Pink Floyd concerts, just to name a few. I was overwhelmed as I was instantly I was taken back to my late teens watching MTV and VHI remembering the U2 video with those Russian cars.  I had to pinch myself a few times to make sure this was really happening....  Here in front of me floating overhead was one of those cars all bejeweled.  It was mind blowing.

After gladly paying our admission, we were  ushered over to the souvenir photo. So you already know, I am a sucker for these, in fact we've got quite the collection at home, but to get to pose for a mock cover at the Rock and Roll Hall of Fame??? I channeled my inner rock star and went with it giving it my best air guitar. Sadly I couldn't get my kids to go along, so it's just me you see. This "priceless" photo had a bit of a steep price, but this was an opportunity I was only gonna get once, so I ponied up and now have a treasured keepsake, that I am sure my grandkids one day will get a real kick out of.

Afterward, we toured the amazing exhibits. Sadly no photography is allowed.  In fact, I couldn't even carry my camera, I had to check it.  We walked around marveling at all the iconic costumes, the ones you've seen in the famous photos but these are the real deal live and in person—Mick Jagger, Queen, Fleetwood Mac, ZZ Top all the big names. And I can tell you that those pants Mick Jagger wore, were just tiny! What was really cool was that my kids knew most of the bands on display from our road trip playlists.

I think what I found most compelling though were the notebooks from Billy Joel, Bruce Springsteen and a few other artists. Seeing the lyrics they scribbled in their spiral pads, lines crossed out, reworked, long before they ever became monster hits really struck a chord with me. I did not expect to be so moved.  It made me wonder what Billy Joel might have been thinking or feeling when he wrote “Piano Man?” Looking at those scribbles and little doodles in the margins, the energy of those moments was right there in front of me. Being that close to those original creative thoughts that went on to reach and move so many people around the world is a feeling I cannot describe. Reading those lyrics from those famous songs, made me recall the emotions, thoughts and feelings that stirred in me when I listened to the recordings. Somehow, looking at the handwritten notebooks made me compare my feelings to what Billy Joel or Bruce Springsteen might have been feeling when they wrote those lyrics.  I searched their handwriting and doodles for clues to their thoughts and emotions looking for some commonality, a connection we might have shared. It was something very special and something I will never forget.

Be sure to check out the temporary exhibits as well. When we were there, there was an incredible exhibit on The Boss, Bruce Springsteen. Not only did we see his notebooks where he wrote some of his most iconic songs, but also the table he sat at in his small apartment and the famous bandana that was in his back pocket on his famous album cover among many other "artifacts".  For me, it was a real thrill to be as close as I may ever come to some of rock’s greatest musical legends. I know it will be thrilling for you too.  Visiting the Rock and Roll Hall of Fame exceeded my every expectation and therefore it is definitely a DO NOT MISS! 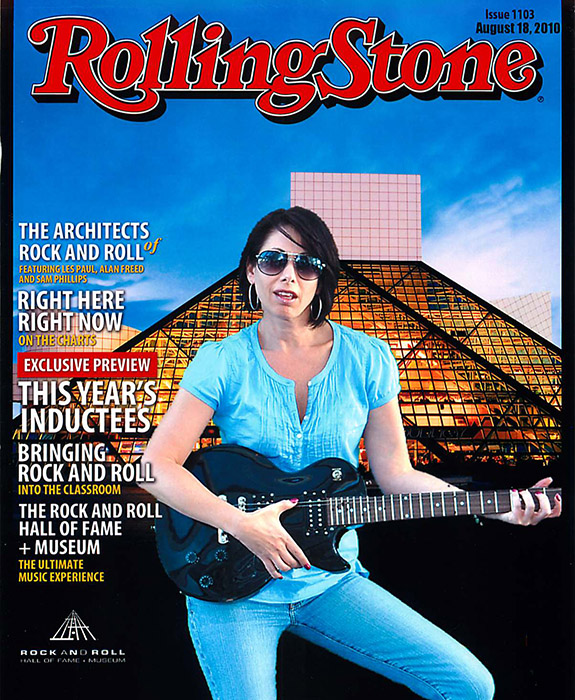