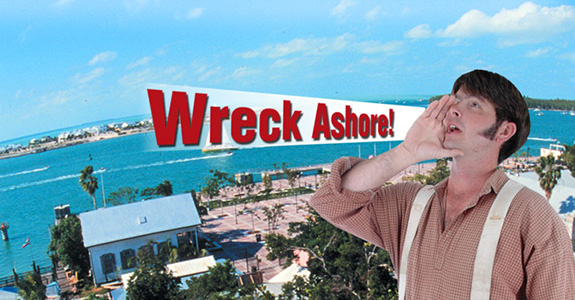 The Shipwreck Treasure Museum is literally right across the street from the Mel Fisher Maritime Museum in the charming Mallory Square, and in all honesty, seems to be a little bit of a rip off of the same idea-with just a lot less exciting stuff.  We probably would have enjoyed it more if a) we done it first and b) if it weren't trying so hard with it's theatrical shtick complete with costumed storytellers shouting from the rooftops.

Again, coming back to our theme of "oceans and everglades", what we did learn here is that at one point salvage was the main industry on Key West. As storms and treacherous waters sunk numerous ships in the area (on average one per week), salvage companies would go and dive and recover what they could from the shipwrecks making Key West at one point (1860) the richest city per capita in the US. The Shipwreck Treasure Museum has lots of artifacts recovered from wrecks off the coast, but none of them stood out to us or seemed special or particularly valuable.  The guides are pretty long winded, in what seems like an  attempt to to stretch out the story to make up for the fact that the goods aren't really worth looking at. After about 15 minutes in the same room, listening to our storyteller who droned on and on, complete boredom ensued and after we'd had enough, we walked out wandering into the sponge market which was infinitely more interesting.