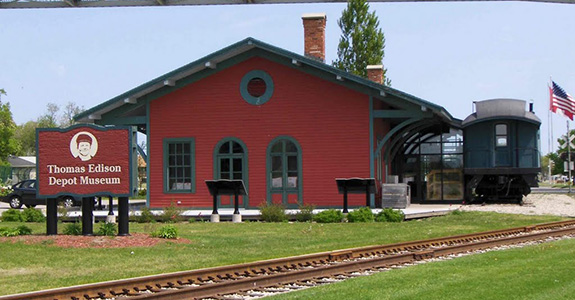 On the road, sometimes things just don't go the way you planned. In our grand loop we had planned to head up to Pt. Huron because for some reason I was obsessed about seeing Lake Huron, and because we wanted to see the Thomas Edison Depot Museum which tells the story of one history's greatest inventors of all time, Thomas Edison grew up in Pt. Huron working at this very railroad depot in his early years while he worked on his inventions.

We did get to see the lake even though it was terribly overcast and windy but the Museum was undergoing renovations and was temporarily closed...ugh. We drove around and explored the town which was quite charming and then headed on to Lansing. If you do a loop like we did, I hope you get to explore the museum it sounds absolutely fascinating. If you do, let me know what your thought about it...I'd love to hear.