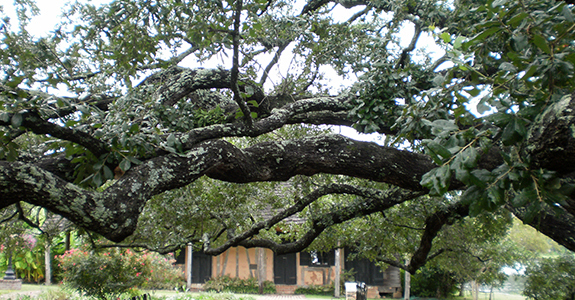 We thought it would be fun to tour this historic town of Natchitoches, which we found out from my friend, Alan, who lives in New Orleans, is pronounced “Nack-a-dish.”  Besides being the oldest permanent settlement in the Louisiana purchase founded in 1714, one of the towns claim to fame is it is where the movie "Steel Magnolias" was filmed and it really is the quintessential southern town just dripping with charm.  When we arrived, we hopped aboard the little trolley driven by our lovely tour guide named Dawn hoping to see some of the famous plantation homes.

Instead the tour went a little something like this… “Here’s uncle Joe’s hardware store and it’s been here since 1868, and here’s the local needlepoint shop where cousin Martha has been selling her handicrafts for the last 50 years…” You get the idea…not real exciting. I kept waiting form something really interesting but the highlight was rolling by a few romantic looking Bed and Breakfasts.  The town is very picturesque and if  if you’re a historical architecture buff, you’d probably love it. My crew, not so much.  Instead we piled right back into the minivan and headed full speed ahead to the swamp tour to see the gators.