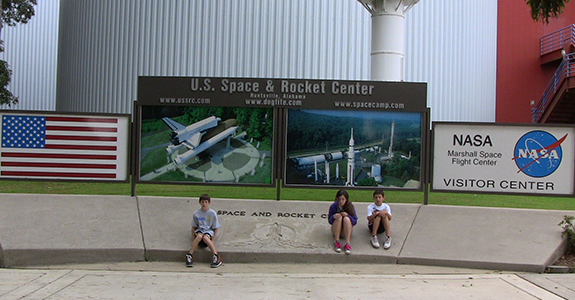 The U.S. Space and Rocket Center was our fourth space museum that we'd visited on our Explore All 50 project. Many of the exhibits were things that we'd seen before but there were plenty of others that were unique enough to make this visit interesting. One highlight was going inside a model of the interior of the space shuttle. We got to see  how the astronauts sleep, eat, and even use the bathroom in space (pretty funny and challenging when you think about weightlessness—notice the position of the handlebars when you go).  We also noticed some science experiments it seemed they were conducting in space particularly growing little plants without the effects of gravity. 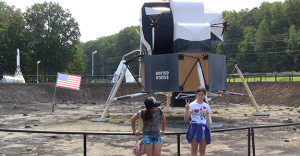 What was really fun for the kids were some "space themed" thrill rides and a rock climbing wall which I was not expecting to see at a space museum.  The kids got on this seated blast off simulator called the Space Shot which left them screaming with delight.  There was hardly anyone there so they must have gone on about 4 times.  They also enjoyed a ride in a simulator.  My kids kept nagging me to go on with them, but I've go to be honest, I am just not good with that stuff.  My brain feels like scrambled eggs whenever I go on roller coasters in addition to feeling totally nauseous. After a certain age, it's ok to just say no.  I love my kids, and there are lots of other experiences we can share but riding in a simulator that feels like a rockin' roller coaster is definitely not going to be one of them. 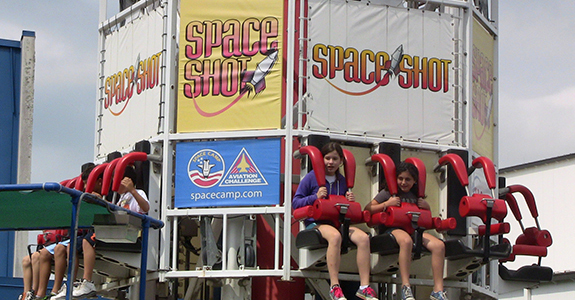 After the simulator they all made their way to a rock climbing wall. I guess you can call me a stick in the mud, but I learned my lesson about rock climbing walls a few years back and now I know my limits. At an amusement park I made it all the way up to the top in record time. When it was time to go down, you are supposed to let go and float and rappel down as the pulley lets you down slowly. For some reason my limbs totally froze. I just could not physically remove my hands or feet from the walls and had to climb back down while my whole body was shaking. It was awful. Lesson learned ... know your limits! 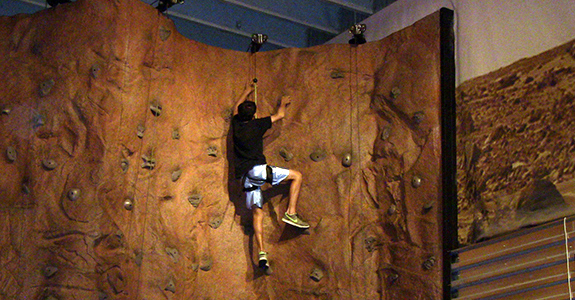 By the way, in case you were wondering, Huntsville is where Werner Von Braun, the captured German rocket scientist and father of the U.S. space program, made his home hence the location of this very awesome space museum.