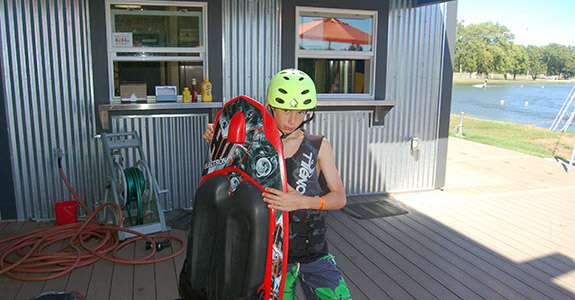 In doing my research, I happened upon this most unusual activity that I thought the kids (now in their teens and tweens) would get a huge kick out of and boy was I right.  Wakeboarding on the man made lake at Wake Nation is definitely one of the stranger things we’ve ever done, but everyone agreed was definitely a good time. Similar to water skiing, wakeboarding is what snowboarding is to snow skiing. But at Wake Nation, instead of being pulled by a boat, you are pulled by a pulley system. Beginners start out on kneeboards. The key is to stay on the outside of the buoys otherwise you'll get jerked around the curve like a rag doll.  I was the brave one who went first and after my first time around I didn't know how to stop, apparently you just let go.  The knee boards were a challenge and I suspect that  if you have any kind of athletic ability at all, you'll be able to master the wakeboard, which is what I should have tried.  Isaac and Jacob both gave it a go and did great.

A word of caution: if you are of the female persuasion, best to wear some water shorts. I wore a bikini and boy was I sorry. You are flipping and flopping and flying everywhere—best not to take any chances of anything falling off. This activity is for the truly adventurous, so if you’re feeling brave…give it a go!