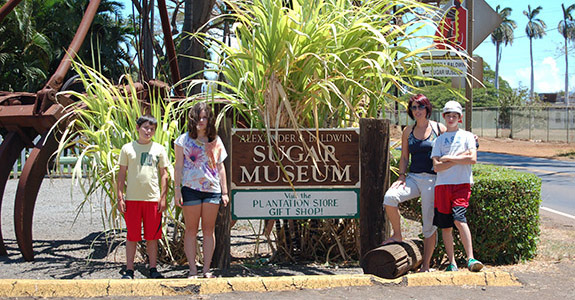 Do you know what role sugar has played in Hawaiian history? It's amazing that something so sweet has left such a bitter taste for the last few remaining true Hawaiians and what's left of their culture.  At the Alexander Baldwin Sugar Museum we learned about the science and history of sugar production in Hawaii.  Even though this was a small and unglamorous museum, I truly felt it was one of the most educational and important stops on the whole trip.

We learned about how the Baldwin family secured land on Maui to grow sugar cane that was harvested by Chinese, Japanese, Korean and Filipino workers who came to work in the sugar cane fields. It was brutal work as the sugar cane stalk leaves have razor sharp edges. Workers had to wear layers of long sleeves and other protective clothing in the hot sun and were paid meager sums.  The Baldwin family made a fortune here as the Hawaiian people much like the native American Indians did not understand the concept of land ownership.  I know I am connecting the dots here, but through  greed and American imperialism, sugar  and a few other crops eventually lead to the overthrow of the Hawaiian monarchy and the annexation of the Hawaiian islands by the United States.  It's a sad chapter in our history and after leaving the museum the kids and I engaged in a discussion about whether they thought Hawaii should really be a state.

On the scientific side, we learned how the sugar is processed from the raw cane into sugar granules that you see and use everyday. Did you know molasses is a byproduct of sugar production? After our visit, we were given a tiny packet or raw sugar to taste and of course, that was the kids favorite part.  It's not often I let them pour an entire sugar packet right into their mouth.  It was a golden color and more coarse as opposed to the fine white granules we're used to. If you like those brown packets of “Sugar in the Raw,” chances are it came from Maui.