If you've been following my blog, it's no secret that Teddy Roosevelt is my favorite president. So it was especially thrilling for me to visit the site of his impromptu inauguration after the tragic assassination of President William McKinley. The site has now been turned into an extravagant multimedia learning experience. 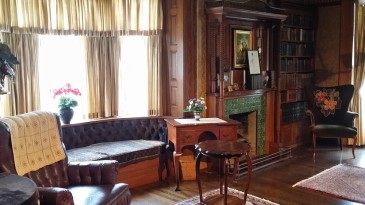 Where TR was sworn in as President.

President McKinley was visiting the Pan American Exposition in Buffalo when he was shot as he was greeting visitors. He eventually succumbed to his wounds and Vice President Roosevelt was summoned to Buffalo.  It was agreed he would be sworn in at the home of his friend Ansley Wilcox. From that day forward on September 13, 1901, our nation's history was changed forever. Today you can stand in the very same library where it all took place and maybe channel the spirit of one of our country's most beloved leaders.

Listed as a national historic site, much time and money has been spent to create an exciting and engaging exhibit about the events of that day. Sadly on our visit we were led by a guide who was a Japanese exchange student. Not only did he not have enough knowledge to answer questions, his extremely broken English was barely understandable. 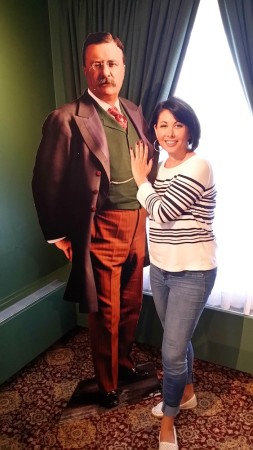 This made the whole experience incredibly disappointing. In addition, there were some beautiful (and what appeared to be very expensive) multi-media presentations but they seemed to focus on the wrong things.  There was a whole room devoted to the Pan American Exposition which is great, but it's not why we came. We came here wanting to know all about Teddy Roosevelt's life and legacy but sadly left feeling badly about so many missed opportunities to really teach the public about one of our country's greatest public figures.

Even the gift shop was a huge disappointment. I was so looking forward to some awesome Teddy Roosevelt souvenirs but believe it or not, there were almost none to be had...Crazy right??? The gift shop was full or little artsy knick-knacks having nothing to do with T.R. Ugh....It breaks my heart when I see amazing opportunities to teach the lessons of history missed-and I relayed my feelings to the staff. If you are in Buffalo and are a T.R. fan, I say don't miss it for the historical importance but I'm not sure you should go out of my way just to check it out. There are probably other places where you can get a better glimpse of the life and times of Teddy Roosevelt.