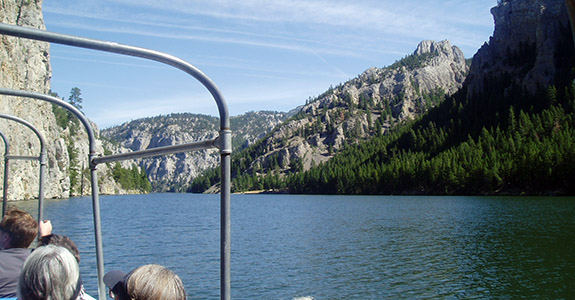 This two hour Gates OF The Mountains Boat Tour follows the travels of Lewis and Clark upstream on the Missouri River where Lewis and Clark recorded in their journals, “Suddenly, there loomed before them towering rock formations unlike any they had ever seen. From both sides of the river, limestone cliffs rose to a spectacular heights of 1200 feet. In many places,” wrote Meriwether Lewis, “the rocks seem ready to tumble on us. At each bend in the waterway, great stone walls seemed to block passage, only to open like gentle giant gates as the expedition drew near.” In his journal, Meriwether concluded: “I shall call this place ‘GATES OF THE MOUNTAINS.”  I have to admit it was really amazing to sit in the boat and imagine seeing the same things that Lewis and Clark had seen on this waterway.  It was as new for me as it was for them and that is something that I will always remember. As the boat meanders around the twists and turns in the river, it does actually look like the rock "gates" open and close-a pretty cool optical illusion.  The leisurely cruise does stop for a bathroom break halfway before turning back. The scenery is just incredible, and guides do a wonderful job telling the story and pointing out natural phenomenon, rare plants, and some ancient Indian artwork.  A nice way to pass 2 hours outside of the car just taking in the fresh air, scenery, history, and each other's company.  DO NOT MISS.