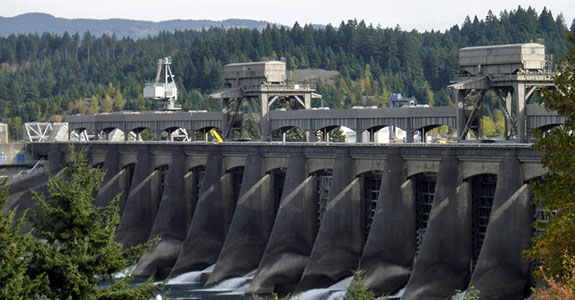 The Bonneville Dam was by far one of most fascinating and memorable things on this road trip. This was a super educational stop on two fronts. First we learned all about hydro-electric power, how the power of the rushing water in the river turns the turbines to create electricity for people to use. Secondly, we also learned about salmon, one of our favorite fish to eat. These two things came together here because the Army Corp. of Engineers had to solve a problem. How to build a hydro-electric dam so the fish would not get caught in the turbines as they move up and down the river during their lifecycle. What they did was build “fish ladders” to allow the spawning salmon to cross up and over the dam without getting trapped inside.. When you tour inside, you will learn about hydroelectricity, as well as see wild salmon up close and personal as they come in and out of view along a window on one of the fish ladders. The different species are counted by an attendant to track the numbers and types of salmon in the river. We eat a lot of salmon and so this was a terrific lesson to see and appreciate where our food comes from. I can't tell you how amazing it was to watch the lightbulb go off in my kids heads watching the salmon swim by and realize this is the same fish they eat on their plate. These salmon are huge and watching them swim by was mesmerizing. I left this place feeling something magical happened to my children, that they had a deeper understanding of the world around them.