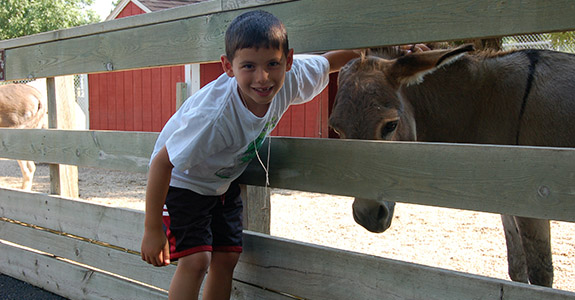 As you may already know, I am not a huge fan of zoos.  Parts of the Bramble Park  Zoo were really great, such as the petting zoo.  The kids really enjoyed getting up close and personal with the animals.  My youngest son Joel who can at times have a hair trigger temper is also the most loving and emotional of my 3 kids.  He is really drawn to animals and when I watch him it's like he has some kind of special connection.  Joel was really drawn to this little donkey and it was really moving to watch the love and tenderness with which he was petting and talking to it.  This is a boy who needs a dog and I am really torn because to me a dog is another kid and taking care of 3 on my own already is more than I can handle sometimes.,

Some of the other parts of the zoo left me really sad and very depressed.. There was a small herd of  Zebras that just stood around looking bored, even a little baby one. All I could think about was what life would be like for me if I had to stand around in one small area for the rest of my life.  Even more heart wrenching was a gorgeous black panther that was kept in a very small enclosure. Panthers are very large cats and this one had the tiniest amount of space to move around.  The little tree and waterfall were a sad attempt to make this cat "feel at home".  This beautiful animal had this glazed look in its eyes as it paced back and forth over and over again, it was incredibly sad to watch and made me want to cry. You could just feel that this cat was going out of it's mind. I truly hope things have changed for those animals since we were there.  There were some tigers and at least their enclosure was much bigger with more space to move around.

The kids especially enjoyed the peacocks that were roaming around-at least some animals could move around freely. There was even a solid white one, which none of us  had never seen before! While this visit had it's ups and downs, at the end of the day it was something we got to do together as a family.