We were super lucky to be some of the first visitors to The Harley Davidson Museum as it had just been completed and opened about a week before we arrived. Of course I'd heard of Harley Davidson Motorcycles, they are the epitome of cool right? I just had no clue that the company was founded in Milwaukee. As we entered the museum the kids were given a scavenger hunt with items they needed to locate and answer questions about. I love when museums do this because it really engages the kids and encourages them to seek out information in a fun way.

The museum is fascinating covering not only the history and evolution of the Harley Davidson motorbike and the brand but also illustrating the engineering and physics of how and why a bike stays upright and how the motor works.  It covers the history of the Harley Davidson bike which started out more like a motorized bicycle, Harley Davidson culture, and the physics of how a motorcycle works. I was amazed to learn that when the wheel spins at a certain rate of speed there is an actual force that maintains the bike upright and they have a great display to show you how that phenomenon works. 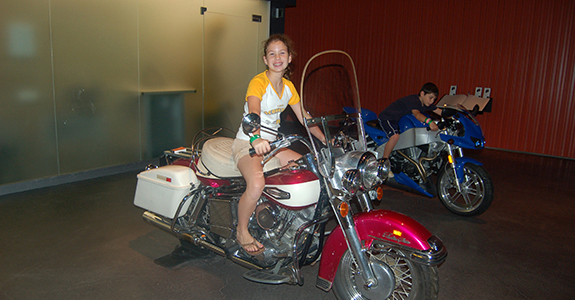 My favorite part (and I think everyone else's too) was a large room with about 8 different types of motorcycles parked in front of a large movie screen.  Everyone got to indulge their Easy Rider fantasy hopping on the bikes and going on a virtual ride on the open roads twisting and turning on the screen in front of us.  What is it about motorcycles that is so cool? Is it the danger factor?  Is it that motorcycles are associated with notorious bad boys like the Hell's Angles and other motorcycle gangs? Or is it something about riding out in the open with the wind in your face free unlike a car will ever feel, the hum of the engine under your body, hands out front on the handlebars that makes you feel you are riding an a steel horse.  Believe it or not I actually have this fantasy that one day when my kids are grown with lives of their own, the four of us will rent a bunch of Harley's and drive up the coast of California.  I think it would be an incredible adventure that would bring us all back together on the road once again. I guess this crazy mom can dream.