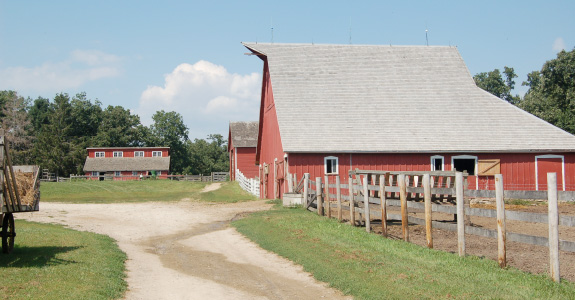 Visiting the Living History Farms is like getting in a time machine and arriving at a farm during three different time periods. You will see the same area as a 1700 Ioway Indian settlement, an 1850 Pioneer farm, and a 1900 horse-power farm and it's an incredible lesson to see how some things change and some things remain the same throughout each farm. It’s a self-guided tour, so you can wander at will, but there are costumed guides everywhere to help you understand what you are seeing and touching. After checking into the visitor center, we were driven by tractor (which was a thrill itself) to the first farm, the Ioway encampment.

One common theme that we discovered here was corn, which is no surprise-heck we're in Iowa!. On the Indian farm, they were growing an ancient strain of corn which barely resembled the corn we grow today. In 300 years through cross breeding and genetics, the corn had gone from a brownish small cob with  irregular kernels to the much larger and uniformly yellow kerneled corn that we know today. It's pretty amazing to realize how farmers have been able to manipulate the crop naturally to develop a corn crop with a higher yield.  In our modern day and age it's now manipulated through genetic engineering in a lab to make it resistant to bugs and disease and to increase the sugar content. Corn that's been genetically modified is labeled as GMO and there's been a lot of controversy about GMO crops-in fact as you drive through Iowa you can see them labeled by the different strains they are testing and growing.  I'll stay out of that debate for now, but I'll just say that I like things the way G-d made them, not a scientist in a petrie dish.

On the Indian farm the kids I learned about the Ioway  way of life, where they lived, what they ate, and how they survived.  There were different activities but the kids gravitated to a large buffalo skin that was stretched out across two poles.  They used a pick like tool to scrap the dried buffalo flesh of the skin which was going to be made into a blanket.  It was pretty hard work. 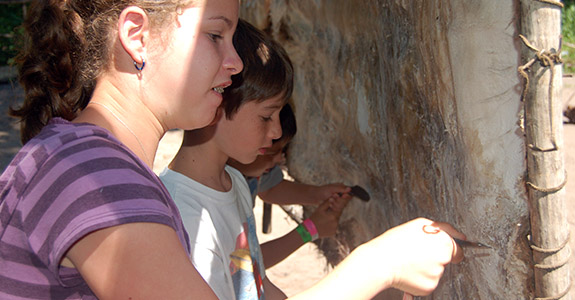 Moving on to the pioneer farm, we saw what life was like on the frontier as a subsistence farmer-which means farming crops for your family to eat as opposed to growing crops to sell. We tried our hand at using the farm tools and saw how difficult it was without the machinery and electricity that we have today. The farm set up was kind of crude and the cabin and farmhouse look like they had been built using whatever materials could be found.  They grew corn and other crops and kept a few animals like some form of wild pigs.

Next we headed over to the 1900 horse-powered farm and were amazed at how “modern” it felt compared to the other farms. We wandered into the quintessential American red barn and saw the animals which we associate with a farm, chickens, cows and horses. In the barn was something else that really caught our attention-a "corn cage". It was a large open area that was caged in with chicken wire.  Inside the cage were tons of dried out cobs of corn.  The farm hand explained to us that after the corn is harvested, it's brought here to dry out after which it can be sold to be ground into flour.  Before it can be sold the kernels need to be separated from the cob and he led us over to this large hand cranked machine that looked like some sort of Rube Goldberg contraption.  Isaac stuck a corn cob in there and Joel cranked away, and indeed the kernels ended up in the little tray and the cob flew out into a basket on the floor.  Pretty nifty! Its fun to do once or twice, but we all could see how that could become tedious and tiring work. . Next we made our way to the farmhouse where the lady of the house was making preserves the old fashioned way. It was a hot summer day and the poor thing was wearing long sleeves and with the stove going cooking the fruit, it was absolutely sweltering as she explained how they preserved the fruit for the winter months by cooking it with sugar. She gave each of us a taste!  Touching on our theme The Immigrant Experience once again, most of the folks who settled in these parts and whose descendants are today’s farmers, were immigrants from various parts of Europe and Scandinavia, and while they brought their recipes like those for preserves with them, they also had to learn to use crops from the new world…like corn. 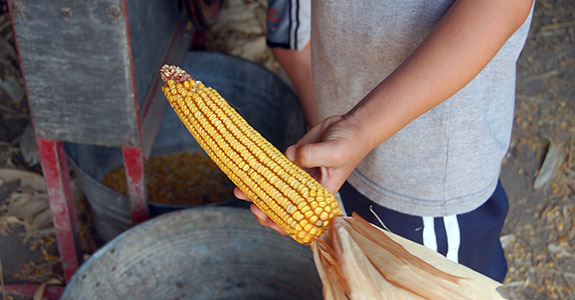 I'd always fantasized about living on a farm away from the big city where a hard day's work means rolling up your sleeves and doing physical labor. Growing your own food and living a simpler life are very appealing.  But after visiting here, and driving through the heartland past many farms, I realized that my fantasy might need a little reality check.  Farm life seems a little isolated and maybe a tad boring, and perhaps that is why so many young people move to the big cities from their rural homes. Sadly, the family farm is slowing becoming a thing of the past as the younger generations move on to other lifestyles giving way to large factory farms who don't grow and process with the same care, focusing on profit and not on quality.  I wonder if the Ioway Indians would have had the same views  about the farm families in 1900. The reality is that just like this farm has evolved over 200 years, the future continues to march on, and the concept of what a farm is will continue to change too like everything in life.