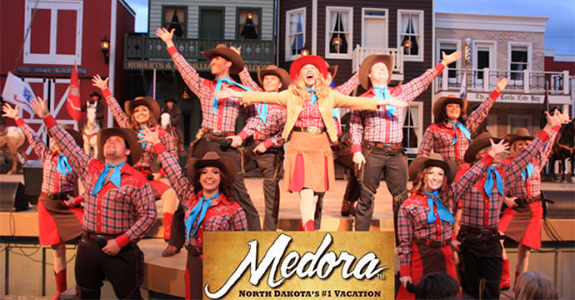 I once met Senator Kent Conrad from North Dakota.  When I told him we would be visiting his state and asked him what were the top three things we should see, he listed them in this order, 1. Medora, 2. Medora, and 3. Medora.   Well, I guess you could say Medora was not to be missed and after visiting there myself I can totally understand the Senator's response.    The town of Medora is charming and beautiful but the most important reason folks come to Medora is for the Medora Musical.  The show is staged in a wonderful outdoor natural rock amphitheater under the stars.   We had no idea what to expect but we were but by the end we were all thoroughly entertained.  It is a complete variety show with singing and dancing in a high-energy western style.  The show we saw also had some guest entertainers, a tumbling troupe from Africa that did the most amazing feats that had the crowd clapping and whooping and hollering their approval.   Much of the musical loosely follows life and times of President Teddy Roosevelt as he had a special connection to Medora.  Medora is where President Teddy Roosevelt had his ranch and where he was happiest enjoying nature in all it's glory..  He was a huge naturalist, and in fact founded the National Park System.  If you didn't know already, Teddy Roosevelt is my favorite president and this musical left me pining for him and the values that he held dear.  I so admire his strength and willingness to take on those he felt were taking advantage of average Americans.  I feel we could desperately use a president like him today, to reign in the greed on  Wall Street, to get our economy back on track and protect our environment.   The musical is hugely patriotic and singing along to the songs and watching the action on stage along with  fireworks display made me proud to be an American.   Everyone else in our group got that same warm and fuzzy feeling and we left humming all the way back to our hotel room It's definitely something we'll remember forever and if you make it as far as Medora, It’s definitely a DO NOT MISS!