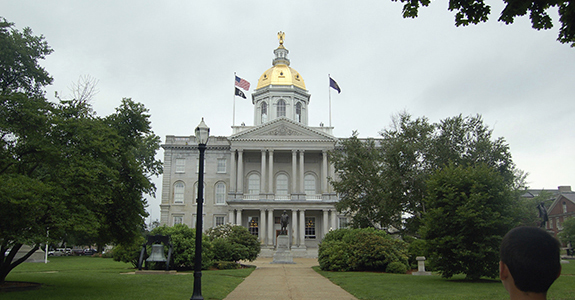 The New Hampshire State Capitol Building felt like it met all the requirements for a state capitol but just didn't have a whole lot of personality.  It does have the requisite columns and the gold dome, but inside it just felt like a plate of mashed potatoes that didn't have enough salt and pepper. One interesting fact though, is that this is the oldest statehouse in which the legislature still occupies its original chambers.   There were some interesting civil war artifacts, particularly a sword that was to be given to a celebrated New Hampshire war veteran who was later killed in battle elsewhere before he could receive it.  Also check out the tattered civil war regiment flags (funny this is sort of trend in New England as we've been all over the country and had never seen anything like that anywhere else-only on this road trip).