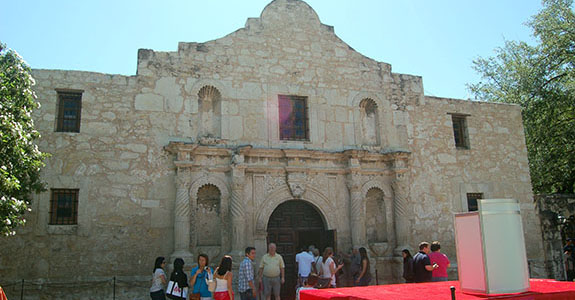 To just about every Texan, and definitely to me, The Alamo is the most revered and important place in the entire state.  After having taken in the spirit of the Alamo, I now understand why Texans are so proud and fiercely independent.  Arriving at the Alamo, it seemed much smaller that what we had expected, but the minute we set foot inside we knew we stood on hallowed ground in a place that stands as the  shrine of Texas liberty.  The battle of  The Alamo was a heroic struggle against impossible odds— a place where men made the ultimate sacrifice for freedom.  Initially the Alamo was a mission but was used as a garrison to defend against an attack by Mexican forces led by General Santa Anna who were trying to put down the Texas revolution in their bid for independence from Mexico.  Upon walking in, I knew these walls had witnessed a fierce and bloody battle fought with unwavering bravery down to the last man.  Listed on the walls are the names of those brave souls who gave their lives for freedom.  Inside the mood inside was solemn and the reverence was palpable.  The battle for the Alamo was lost and Santa Anna's troops were particularly cruel taking no prisoners. We read about the fearless leader James Bowie and about the bravery of Davy Crockett who fought  till their dying breath.  Later Sam Houston led an attack against Santa Anna's army and vanquished the enemy declaring their independence from Mexico.  Legend has it , that Houston's men who caught Santa Anna's army by surprise yelled out "Remember the Alamo" before they attacked.  We took a lot of time here, reading and discussing the displays.  My kids were really engaged wanting to know about the battle and the actions of those brave souls who stood their ground and lost their lives here.  I know that we were all incredibly moved .. There is much to see and read about here, and I urge you to take the time to read and tour the displays. You will walk away with a memorable message about what it truly means to die for freedom.  Throughout our visit we could sense a fierce independence that defines Texas.  The wellspring of that spirit is without question the Alamo and after visiting we came to understand why everything is so big and bold, why the rules are a little bit lax, and why Texans have an outsized passion for all the things they love.  Wherever our adventures led us around this big and bold state, we too remembered the Alamo and all it represents and over the course of our journey came to understand and appreciate the heart and soul of Texas.