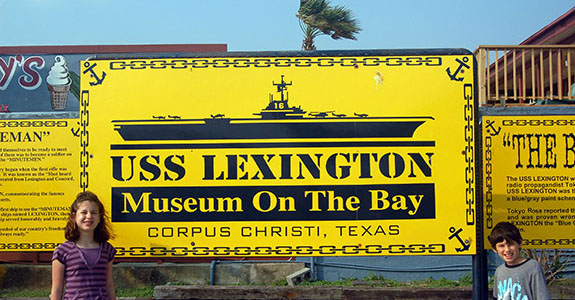 If you’re like us and have never been on an aircraft carrier, then you’ll find The USS Lexington Museum On The Bay really interesting just like we did. This ship was enormous, in fact the kids and I felt like it was a floating city.   This ship was used in World War II and we got to see what life was like for the sailors on board, where they ate and slept, how they manned the battle stations and where they got locked up when they misbehaved.  We went on the deck and saw a few of the aircraft as well.  I was really surprised that given the size of the ship, that the "runway" for those planes is pretty darn short and you really need to know what you are doing to take off and land on an aircraft carrier.  The USS Lexington saw battle in the South Pacific.  As we walked back after taking in the view from the bridge we noticed a wall with lots of red and black Japanese emblems.  We learned that there was one for each downed enemy plane (red for day and black for those shot down at night).  As I was walking around the ship, I thought a lot about what life must have been like for my Grandpa who served in the navy during WWII probably on a boat much like this one.  My grandpa was a sheet metal worker and got drafted to serve his country when he was a young newlywed.  He was assigned to the Navy because his skills could be put to good use on the boat.  My grandpa was a pretty charming guy and somehow also managed to get some plumb position delivering the mail and handling telegrams to the officers.  When I was a kid, he only told us funny stories about his time on the boat, but I am sure there was much more that he didn't tell me, and seeing what it was like on this warship made me realize that.  I can't tell you how many movies I've seen about World War II, but setting foot on this boat really made me realize that life is not a movie.  It felt good to see and appreciate what life was like for those brave souls who became known as The Greatest Generation.   As we left the ship taking it all in, we thought about what an incredible feat of engineering it takes to build a ship like this getting so much heavy metal to float on the sea.  A few years after this trip, my youngest son Joel and I watched a terrific series about World War II on HBO called "The Pacific".  It was a gritty and realistic portrayal of some of the fiercest battles of the war.  As we were watching the scenes that take place on the ship, we both recalled our time on the USS Lexington making the story seem even more real. 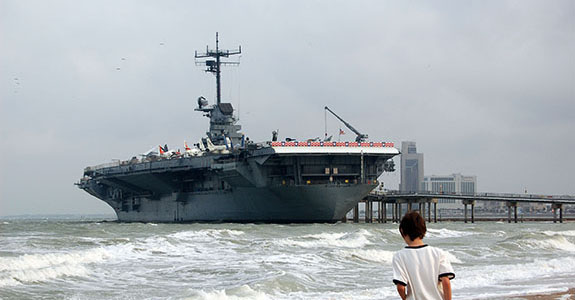