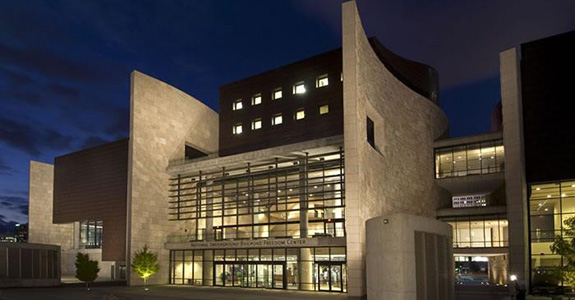 The National Underground Railroad Freedom Center is a wonderful and moving museum that explains the path runaway slaves would take to escape to the North to freedom. It is located here on the banks of the river on the Kentucky-Ohio border, which at one point was the dividing line between slavery and freedom. Many former slaves crossed right here to freedom after a long and arduous journey.  What I loved about this museum is the poignant way it takes you on the journey of a runaway slave on the underground railroad.

As you enter, you are taken into an actual slave pen—a structure where the men were chained to second floor rafters and the women remained on the bottom. This is where the slaves were kept until they were sold at market. Standing inside this small structure, I could not help but feel utter sadness and hopelessness.  My kids and I thought about what it was like to have been captured and kidnapped from the only home you had ever known ending up in a completely foreign place after a treacherous journey across the ocean, and then kept like an animal in a pen not knowing what fate held in store for you and your family.  Being inside that structure was overwhelming, much like I'd felt when I visited the barracks in Auschwitz/Birkenau.  The walls just wreaked of pain and sadness.   This is just the beginning of an incredible story.

As we made our way through the museum, we learned so much about slavery, abolitionists, and the kind folks who helped runaway slaves on their way to freedom in the north.  Thanks to the generosity of the Oprah Winfrey Foundation, Boeing, ATT&T and many others, we found the exhibits, interesting, engaging and very thoughtful. We learned about the many "safe" houses where runaway slaves spent the night before journeying on in secret.  We learned about the many creative ways slaves made their way to the North. Joel and I were fascinated by the story of Henry "Box" Brown who shipped himself to freedom in a sealed crate.

Sometimes our history as a great nation is painful.  I feel as an American and more importantly as a parent, it's important to face our history in order to face ourselves.  One of the greatest dividends I have reaped by traveling across America with my children and taking time to explore wonderful museums such as this, is the opportunity to teach them about right and wrong, to show them the whole American story warts and all, in order to breed compassion and empathy and sensitivity to the plight of others.   This is one of the finest museums we have ever been to for it's educational value, and more importantly for the indelible mark it made on all of us in our hearts.  DO NOT MISS this incredible museum, and afterwards, I urge you to do what we did, and  stand on the banks of the river after attending the National Underground Railroad Freedom Center and to think and appreciate what your freedom means to you, and what it might have meant had you crossed that river as a slave.