Main Menu
You are here: Home / Go / The Hermitage (Nashville)

The Hermitage is the beautiful homestead of the 7th president of the United States and Tennessee’s favorite son, Andrew Jackson. These 1,000 acres were transformed from frontier forrest to a prosperous farm that sadly deteriorated into post civil war dilapidation.  Finally rescued it is now preserved as a public museum and a National Historic Landmark. As a president Andrew Jackson was both loved and hated and these stories of Indians, white men moving West, slavery and freedom, the changing roles of women, religion and reform, and fortunes made from cotton are the stories of Jacksonian America.

There are several tours you can take here and we opted for the slave wagon tour and the mansion tour. Both were incredibly informative and each gave a totally different perspective of life at the Hermitage. Riding in the horse drawn wagon we saw where the slaves lived and where they picked the cotton. It was undoubtedly backbreaking work.  We saw the home of Andrew Jackson's head slave Alfred Jackson and listened to the clang of the slave bell that designated the start and stop of work.  I imagined for a second what it might have been like to work at the Hermitage, to be a slave, unable to leave, to be forced to do as you are told, with no rights or freedoms.  After the slave tour we headed inside the Jackson's home, which was not as luxurious as one would imagine.  There were beautiful fabrics and wallpapers, but the home had an understated feeling about it. Here, I tried to imagine life on the farm as a slave owner wondering how the Jackson's viewed their slaves, as people or as property?  Since civil rights were an important theme on this trip, this was a great place to visit the root of all inequality- to understand what being a slave meant and what slavery meant to the economy of this country.  There is also a fantastic museum on the premises in another building on the property that does a wonderful job of explaining the history of The Hermitage, and why Andrew Jackson was such a controversial figure. If you are in Nashville-it's a DO NOT MISS!

In front of the cabin belonging to Alfred Jackson, the head slave. 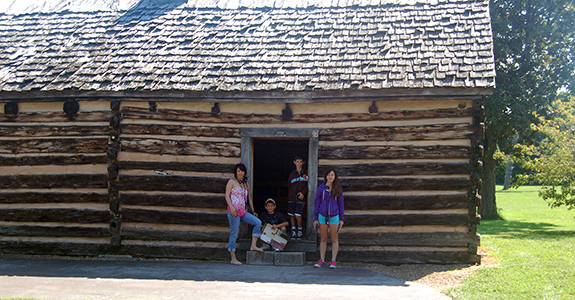 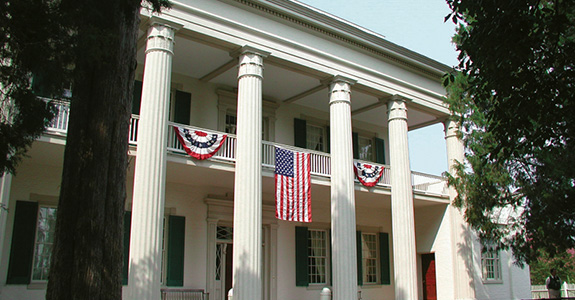