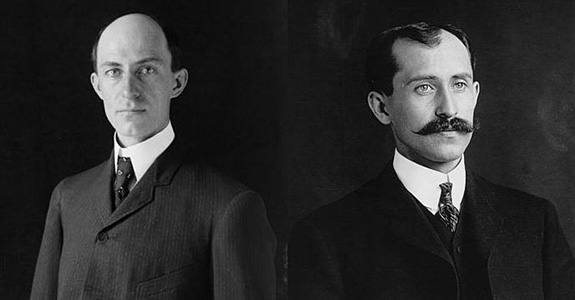 If you are like me, the only place you would  associate with the Wright Brothers is Kitty Hawk in North Carolina. I had no idea, until I did my research, that the Wright brothers were from Dayton, Ohio, and that they actually started in the bicycle business, and through experimentation, developed their ideas and prototypes for the first airplane.

Afterwards we headed next door to the museum complex to explore the life and times of Orville and Wilbur Wright. We learned about their family life, their job as typesetters, and their curiosity that led to the discovery of flight. Seeing these two brothers made me think of my own two boys.  My boys do love each other but they bicker back and forth and it's pretty funny to listen to.  They are now both in an engineering program in their high school and I wonder if they might one day visualize some great experiment that might change the world. This mom can only hope!  I wonder how Orville and Wilbur got along in everyday life and how their parents felt about their ideas and their great discovery.

This is just a super place to expand your knowledge about one of the greatest inventions of the 21st century and to learn about the two brothers whose curiosity and persistence resulted in man's ability to fly.  I doubt they could have hardly imagined what an impact their invention would have in the future, changing the way we travel all across the globe. The Wright Cycle Company Complex is an absolute DO NOT MISS!!