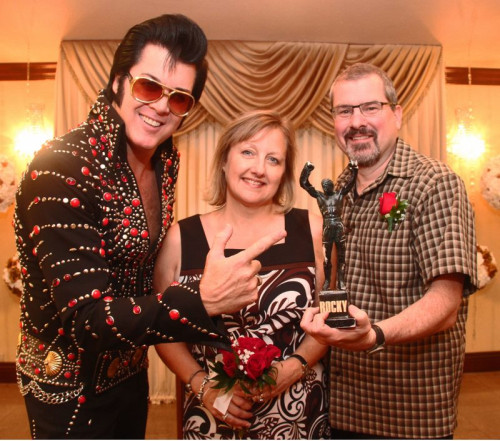 Earlier this year at the LA Times Travel Show, I had the awesome opportunity to meet Larissa and Michael Milne, the writers behind the very popular and acclaimed travel blog Changes in Longitude.

In 2011 they quit their jobs, sold their house and gave away their possessions to travel around the world for a year with a Rocky statue. They're now global nomads–completing an epic American road trip to visit all 50 states. I asked them about their travels here in the USA and get their global perspective on road tripping with Rocky ...

Q: Michael has been to 49 states and Larissa been to 42. What do you guys have left and how long do you think it will take you to finish?

A: Larissa has the upper Midwest and Hawaii left to visit while Michael just has Hawaii. Later this year we're driving cross country so Larissa will pick up her remaining mainland states and then we're off to Hawaii where we'll both get #50 together. Yes we are travel geeks who keep track of such things. Our original goal had been to go to all 50 by age 50 but that didn't happen so how about "50 states by 55"? 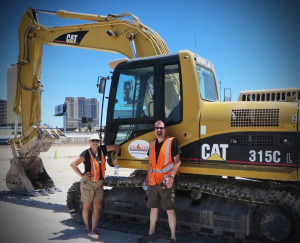 At Dig This Las Vegas, Nevada

Q: You guys travel around the world, what are you're favorite things about the USA?

A: In the USA we love the wide open spaces for road trips. Africa and Australia also had wide open spaces, but in America there's lots of quirky things to see along the way and we love seeking out the unusual. Since we're food lovers we also have to put American barbecue right up there with our favorite things about this country. And did we mention donuts?
Q: How long do you stay in a particular city and where was your most "exotic" stay in the US?

A: We like to travel slowly, staying for a month or more at a time in each place. We usually rent apartments through Airbnb so we are practically citizens of "Airbnb World." It's hard to come up with "exotic" in America that compares to far-flung corners of the globe but Las Vegas was a blast. We don't gamble so we went there for 10 days with the goal of never setting foot in a casino and found out there is so much to see and do there. Larissa went aerobatic stunt flying with Sky Combat Ace where she did barrel rolls and flew the plane herself in a 360 degree loop. (Michael was content to stay on the ground for that one.) We also operated heavy construction equipment at Dig This, shot Uzis at Gun Garage and renewed our marriage vows with Elvis at the Graceland Wedding Chapel. How many cities offer all that?

Near the mist of Niagara Falls we were also wowed by the dynamic city of Buffalo, NY and learned that sometimes the overlooked places offer the most interesting stays. We spent a day working at Mazurek's, the last of the old-time Polish bakeries, arriving at 6 AM to make the donuts and meeting quite a few local characters who are full of pride for their city. We also just returned from Alaska and were really blown away by the scenery there. Pictures don't do it justice. To anyone who wants to go to New Zealand to see The Lord of the Rings scenery you can go to Alaska instead. It's just as awe-inspiring and much closer. Our Rust's float plane tour where we flew over a glacier and landed right next to it is one of the most exciting things we've done anywhere.

Q: How do you support your "nomadic" lifestyle? How do you decide where you're going next?

A: In 2011 we quit our jobs, sold our house and gave away our possessions to travel around the world for what we thought would be a year. By learning to live much more simply and cheaply we have been able to extend our journey to three years and counting. We work as freelance travel writers, writing for the Philadelphia Inquirer, AAA and other media outlets, which pays some of the bills. That also ties into your follow up question. We often pick our next destination based on where we can get cheap housing. We have general ideas of where we want to go but the housing clinches it. We've stayed in some remote places, the Mojave Desert outside Yucca Valley, California comes to mind, but no matter where we are there is always something interesting to experience. 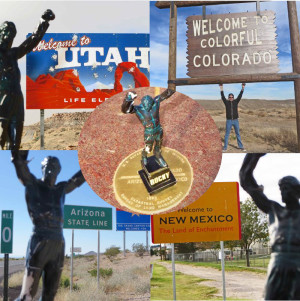 Q: How many states has Rocky been to? Does Rocky have a favorite besides PA?
A: Since we're from Philly we're traveling around the world with a Rocky statue. He is universally recognized (except in North Korea) and has been a great icebreaker for meeting new people. He's put his boxing gloves down in about 20 states so far, not bad for a little inanimate object. His favorite state was probably California where he met the man who created him, sculptor Thomas Schomberg who made the Rocky statue which originally appeared in the films and now sits at the base of the Rocky Steps in Philadelphia.  In California "Little Rocky" also met up with romance novel cover boy Fabio, but that might have been more of a thrill for Larissa.
To find out more about Larissa and Michael and to follow them on their journey, check out their website and travel blog at changesinlongitude.com
Filed Under: News