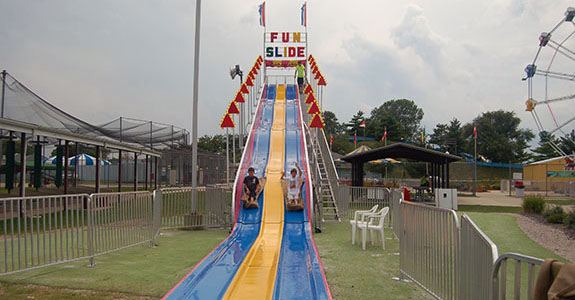 After a whole day of discovering the land of Lincoln in Springfield and dinner at Perkins, we headed to Knight's Action Park, another family fun center with mini golf, go-karts, batting cages, and lots of cool rides, along with some kind of water park( that when we were there happened to be closed). It was just our luck that as we arrived, most of the park closed down because of a lightening storm-yeah you don't want to be around wet metal when that happens.   All that was left to do was an arcade inside to pass the time till the storm moved out…$20 worth of quarters later, we finally got to go out and hit the batting cages.

The kids and I had a fantastic time.  I was always fairly athletic as a kid but for some reason my parents never let me play any team sports. My brothers both played little league but as much as I begged to play I only got to watch from the sidelines…During an occasional trip to the batting cages on the weekends my parents did let me have a few quarters to hit some balls, but as much as I could swing for the fences, it was never enough to convince them to let me play on a team-thank God we've come a long way since the '70's.  I have to admit—I can still hit a fast pitch and being in that batting cage made me feel good but also sad for the things I missed 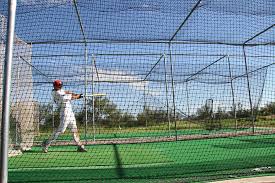 as a kid. The best part though was the look of surprise on my kids faces when I connected with the ball and sent it flying out into the netting.  As a side note, I just cringed at having to put on the batting helmet,  is it just me or is anyone else creeped out at the thought of  of getting lice from those things?

BTW—the Fun Slide in this picture was really fun.  My boys slid down it once before the storm came through.  When the storm passed and we were in the batting cages,  a couple of older kids who worked thought it would be really fun to slide down when it was wet.  As a parent I just knew this was going to end badly, and of course they picked up speed really quickly and  just kept going, full throttle, right into the stands behind the batting cages…OUCH! Another teachable moment born of teenage stupidity...never go down a slide when it's wet!