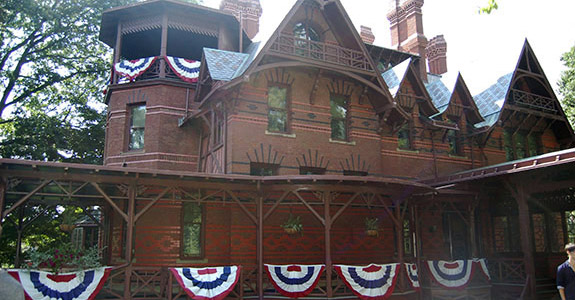 We were so excited to learn more about this American literary icon by seeing the home where he lived.  We arrived and joined the tour led by a snappy little English fellow and headed to the home.  Here we are, at Mark Twain's House and Museum, you'd expect to learn about the man, his life, his inspiration his works right? Wrong!

We learned about the wallpaper in the living room, where they bought the chandelier, and the origins of the carvings of the bed.  The architecture of the home is pretty eclectic and is as much a character as was Twain himself, but that's not what we expected.  My kids and I kept looking at each other, trying to figure out if it was going to get more interesting or if we were going to have to make a break for it.  We stuck it out to the end, but what a let down. We tried asking questions to bring the conversation back to his life and works, but to no avail.  All we got was "Yes, the typewriter, isn't that just FAB?" What did he write one it, any of his famous works? It was like pulling teeth to get any kind of meaningful answer.

What a missed opportunity to discuss his works, his life, his influences.  Even the displays in the museum that is adjacent to the home don't give too many clues.  We left wanting to know more were deeply disappointed.  I am not sure if it was the tour guide himself who chose to keep the material strictly to the home or if that's just how the management likes it.  Be forewarned, if your not into wallpaper and victorian style, this may not be the stop for you....Ugh...so sad. 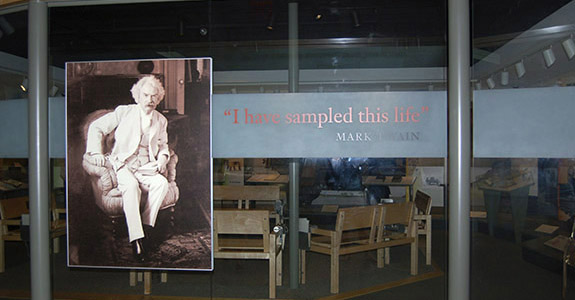