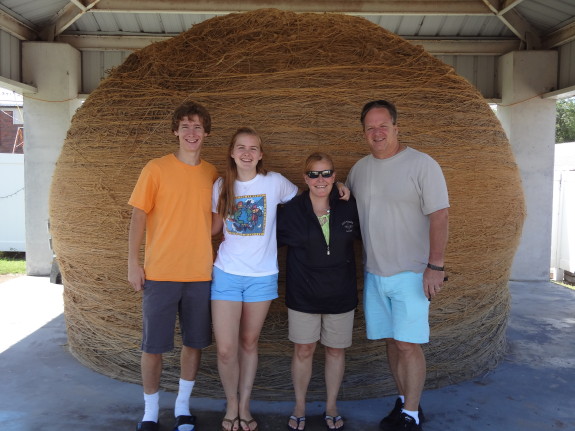 Sometimes we start a project and the benefits that we derive from it exceed our expectations in ways we could never imagine. I don't think Val Pentony ever thought  back in 2004 when she started her quest to see all 50 by 50 what kind of impact it would have on her, her family and her friends.  Her project has not only inspired deeply felt patriotism, but also a love of learning and an appreciation of diversity. It has also unleashed a sense of adventure to explore everything our great nation has to offer resulting in so much more than just photos in an album and happy memories 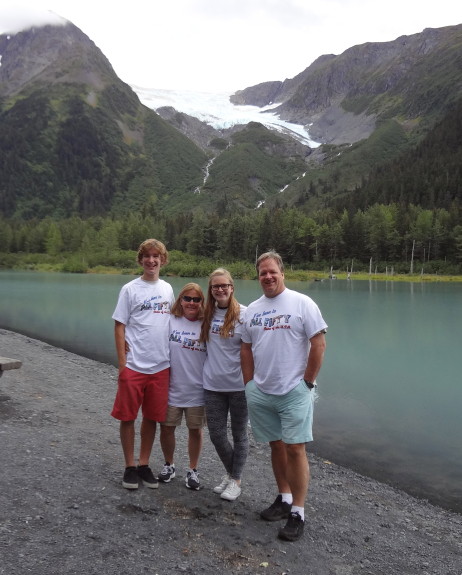 The travel bug took hold of Val in her childhood and so in 2004, realizing that time was of the essence, she embarked on her first road trip with husband Bill and kids Tanner and Brooke heading to 4 states including Alabama and Mississippi. They continued on that same path visiting at least 3 states over the next 4 years-and that means abiding by their rule of spending at least 3 days and nights in each state. While friends were traveling abroad as the economy was starting to tank, Val was more determined than ever to explore the US and spend the family's hard earned dollars right here at home. In order to achieve her goal Val has had to work around the kids schedules and from that another a travel tradition was born. Since 2010 when Tanner spent time at snowboard camp at Mt. Hood she has taken additional trips with her daughter and several friends and their daughters which has become and annual event affectionately known as the "Summer Sister's Trip". Each of those friends is now on their own quest inspired by Val's 50 x 50 project.

Val says she learns better by experience than by memory and the more she's traveled the more her and her children have become fascinated with our nation's history and geography in a way they never were in the classroom.  I know exactly what she means. One of the greatest, albeit accidental benefits of our family road trips are what I call lessons in 3-D. What we've all learned reading in our textbooks pales in comparison to what we've learned out on the road, being there in person. You internalize the experience and the information and think about it in the context of your life, whether it's history, science, geography even economics. And while her kids weren't always thrilled about everything they saw (Laura Ingalls' home just can't compete with a water park) Val has tried her best to make it fun for the whole family, usually by incorporating the family's favorite hobby of hunting for rocks, gems and fossils on just about every trip. 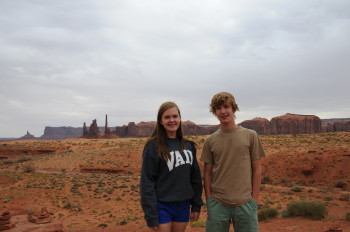 By 2012 their 50 x 50 goal was in sight, just in time for college essay writing time. Val and Brooke quickly realized that all those amazing experiences they'd had as a family on the road were perfectly suited for an essay destined for the "special pile" that's under consideration. According to Val, Brooke's essay was sure to stand out because it focused on things that "99% percent of other applying students would not have experienced". It's so true, seeing our country through road tripping gives you such a unique perspective, it makes you think about your inner self as you connect with all you see around you. I had the opportunity to read Brooke's essay, and it truly was incredible and inspiring. It shows humility, patriotism, and many lessons learned. This excerpt from Brooke's essay says it all...

It’s often said that “life is a journey,” but my life literally has been an unending voyage. Ever since I can remember, my mother’s mission has been to see “50 by 50”—that is, for our family to visit, experience, taste, and live each of our nation’s glorious states before mom’s fiftieth birthday. We haven’t, however, idled away our time drinking virgin mai-tais on the beach: mom always wants to “see the rare and unusual.” After ten years of traveling, I now truly understand Henry David Thoreau’s maxim: “The core of man’s spirit comes from new experiences.”

After all this great heartwarming stuff, I had to ask Val those hard hitting questions that everyone wants to know the answers to. And here they are... 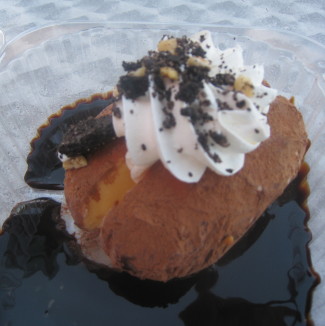 You can try this ice cream "potato" at the West Side Drive-In, in Boise, ID

Most memorable Food Experience?- Potato flavored ice cream at the Clover Leaf Creamery in Buhl, Idaho (wow, who knew...), and a potato shaped ice cream rolled in chocolate powder topped with whipped cream to look like a baked potato. "The creativity of this "delicacy" was amazing".

Biggest travel mistake?-following an out dated GPS that eventually led to a dirt road and then onto a snowmobile trail with tree branches draping over the car. Lesson learned-make sure the GPS is fully updated before you set out.

Best advice for travel planning-enlist your kids.  Val makes her kids map the coordinates of every stop they'll be making and works with them to plan their route, making it not only fun, but an awesome learning experience.

Biggest reality check?-The night before their visit to the site commemorating the destruction caused by a tornado in Joplin, Missouri, by coincidence the family happened to catch a show all about it being aired on the Weather Channel. It reinforced for everyone, the reality of what they were seeing and experiencing.

Bill, Brooke and Tanner are incredibly lucky to have such an amazing wife and mother. Their lives are forever enriched in ways beyond measure for all of Val's efforts to conquer her goal of 50x50.