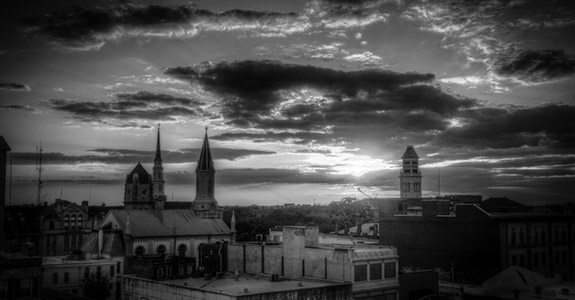 If you are not traveling with super little kids (under 9 or 10), then you’ve  got to do a ghost tour at night in the most haunted city in the USA-Savannah's claim to fame. There are some really good guides who will give you an unbelievable experience- but apparently I couldn’t find them.  I did my research when I planned this trip, checking reviews, but it just goes to show you, even if you do all your homework, you can still end up with a less than stellar experience.  I will tell you though, it was the funniest thing on our trip and my kids and I still laugh about that experience every time it comes up.

We ended up booking a tour with Savannah Ghost Walk’s Chase Anderson who by all accounts was supposed to be phenomenal.  We gathered at Johnson square at around 10 pm. and along with another 15 or so folks, waited for our guide to arrive.  Suddenly out of the darkness a character in a vest, top hat and walking stick arrived and gathered us into a circle.  He started in on his shpiel telling us about some of the haunted places we'd be headed to.  It sounded good but then he started to drone on and on.  I could feel the restlessness of the folks gathered wondering why we still weren't going anywhere.  As a guide you need to know how long you can hold your audiences attention and how to time your tour.  After a good long 10 minute rambling monologue, we were finally off....unfortunately we were led down some smelly trash-filled alley where we gathered for what seemed like an eternity as Chase told us another rambling story that was impossible to follow-the kids looked at me, I looked at each of them and we all seemed to know innately this was not going well.  Joel started rolling his eyes as Chase used this echo voice for a creepy effect, saying a word 3 or 4 times getting softer and softer each time.

From the alley,we were led to a very happening pub who's basement is supposedly haunted. According to Chase,  this pub was featured on one of those ghostbuster type shows on cable TV and is a well known local haunt.  We headed down the small staircase into the basement which seemed pretty empty.  As we all filled the space which was divided into 3 small rooms we were told not to move around but to stay in the one room we were in so as not to disturb the spirits...(.oh my-cue the creepy music!).  I am usually tuned in to stuff and my ghost radar did not go off.  There was nothing unusual about this basement at all.  Again, the story rambled on and on, this time about slaves that were brought off the boats at the riverfront and held in this basement before being sold off.  During another -at this point mind numbing -ghost story   in which phrases were repeated in an echo and terms as well as now spelled out in a creepy voice, my kids and I could no longer take it. Joel looked at me and I looked at him and it was all over.  We both tried with all our might to suppress our giggles but it wasn't happening.  I had tears in my eyes and  couldn't take it any longer trying desperately to contain myself.  Lilia and Isaac soon caught the giggles and it got to the point where we couldn't even look at each other without losing it.    A woman on the tour standing next to us gave us a dirty look and when I quietly told here we were leaving.  I thought we had offended her until she said "Lucky you…this guy is a FREAK". Running out of there we laughed so hard we nearly peed in our pants

And that is the tale of the Ghost Tour in Savannah.  As we walked back to our hotel we did see plenty of other guides, who were pretty animated and seemed to be good storytellers...We just had some bad luck and at least now we can laugh about it forever.